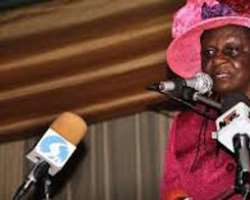 Chairman of the commission, Deaconess Joan Ayo, who briefed newsmen in Abuja, on Monday, said a total of 3,273 sat for the examination and that those, who passed had already been promoted.

She said the 1,356 candidates, who failed to make it this time, would have to wait till next year to try their hands on the examination again.

According to her, the exercise would be conducted annually to discourage stagnation in the civil service.

Ayo, however, said this year's result was an improvement against the 2013 performance, saying 'a total of 3,273 candidates participated in the 2014 promotion/evaluation exercise, as against 4,493 candidates in 2013. Out of this number, 1,917 candidates were successfully promoted, as against 2,672 in 2013.

Candidates were drawn from the administrative officers' pool of the office of the Head of Civil Service of the Federation, Foreign Affairs Ministry, offices of the Accountant-General, Auditor-General and Surveyor- General of the Federation and professionals in other agencies of government, as well as state counsels in the Ministry of Justice.

The FCSC chairman said that Institute of Chartered Accountants of Nigeria, Nigeria Institute of Management alongside proven retired and serving officers served as resource persons to set and mark the 'professional questions, while FCSC commissioners set and marked the civil service and current affairs questions.'

She stated that to maintain the integrity of the process, strict measures were employed, including the introduction of biometric accreditation by the Department of State Security, customised answer sheets, invitation of the police, Independent Corrupt Practices Commission (ICPC) and the National Security and Civil Defence Corps (NSCDC) for monitoring