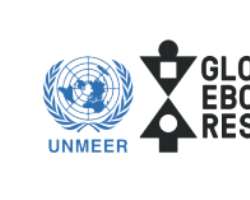 Accra, Ghana (26 October 2014) – The Secretary-General's Special Representative and Head of the United Nations Mission for Ebola Emergency Response (UNMEER), Anthony Banbury, has completed his latest series of consultations with the Presidents of Guinea, Liberia and Sierra Leone on the international community's support for national efforts to tackle the Ebola crisis.


In addition to his meetings with the leaders, he also engaged in a series of meetings with national and international partners and visits to health facilities under construction to hear and see first-hand how efforts to stop the Ebola virus are progressing.


The talks between the Special Representative, the Presidents of the affected countries, and their senior emergency response officials, focused on how an operational framework for international support could be adapted and implemented to best support ongoing national response efforts.


The framework will serve as a guide for all UN agencies, funds and programmes. It will act as the basis for the UN Ebola Crisis Manager in each country to engage with national counterparts and support the ongoing operationalization and implementation of national response plans.


The operational framework was developed last week at a high-level meeting of senior officials from UN agencies, funds and programmes, as well as international partners such as the World Bank, the US Centers for Disease Control and Prevention and the UK Department for International Development (DFID).


The framework is guided by the following principles: adopting a regional approach; the centrality of national ownership; the UN's work should complement that of national governments and partners; clarity for national governments in what can be expected from the UN; a singular UN system-wide approach in responding to Ebola; and, a UN response which is specific to the needs of each country.


The framework sets out the step-by-step process on how the UN and international partners could support the three governments in achieving the overarching objective of assisting them to become Ebola-free, and an immediate objective of 70 per cent of Ebola cases treated and 70 per cent of burials carried out safely and respectfully by trained and equipped teams by 1 December 2014.


Based on input and direction from the Presidents and senior response officials from Guinea, Liberia and Sierra Leone, the operational framework for international support for the national responses will be updated, refined and shared with relevant stakeholders.


The Special Representative's meetings were also aimed at providing him with the opportunity to learn more about the current situation in each country so that UNMEER's resources are well-placed to be effective in the continuously evolving situation on the ground.


While in the three countries, Mr. Banbury also took part in a range of other activities, including meeting with representatives of civil society, non-governmental organizations and the international community.


In his meetings in Guinea, the Special Representative was briefed on the country's progress in its response efforts. These include a treatment centre in the southeastern town of Macenta, supported by the Government of France, which is near completion, as well as plans to establish over 60 community care centres and an Ebola treatment unit in Conakry, the capital.


Mr. Banbury also discussed with partners plans to establish a logistical hub along the country's border with Liberia. UNMEER will support government efforts, including providing helicopters and vehicles to transport goods and services to care centres, so that they are equipped with vital supplies at all times.


In the Sierra Leonean capital of Freetown, the Special Representative inspected the safe burials operations room for the city's western district, run by the Government with support from DFID and former UK prime minister Tony Blair's Africa Governance Initiative (AGI).


In Liberia, the Special Representative was given a tour by United States Major General Gary J. Volesky of the Monrovia Medical Unit, currently under construction by the US and staffed by US public health workers. It will be used to provide high-quality medical care for Ebola responders. The safety of health care workers and other responders in Liberia's urban areas and other districts has been a concern.


Also in Liberia, accompanied by Major General Volesky, in Tubmanburg, outside of the capital, Mr. Banbury visited an emergency treatment unit being constructed by the country's armed forces with support from the US military. The Armed Forces of Liberia (AFL), he noted during the visit, are making a valuable contribution to the community in the area and the country as a whole.


"All of what I discussed and saw – from my talks with the leaders of each country and my visits to medical facilities being put in place for both Ebola victims and responders, to seeing the level of cooperation between national and international partners such as the AFL and the US military and the Sierra Leonean government and AGI – leads me to believe that we are on right track," Mr. Banbury said upon his return to UNMEER's headquarters in Ghana. "There are no differences among us and we have an unparalleled unity of purpose."


"But that does not mean we can afford to let up for a moment – time is of the essence and we need international support to be ramped up, from more medical supplies to more health care workers in all three countries," he added. "Only then, when Ebola is stopped, can the people of Guinea, Liberia and Sierra Leone return to a life free from the fear of this deadly virus."

The first-ever UN emergency health mission, UNMEER was set up in response to the unprecedented Ebola outbreak. It is harnessing the capabilities and competencies of all relevant UN actors, under a unified operational structure. The World Health Organization (WHO) is responsible for overall health strategy and advice within the Mission, while other UN agencies will act in their area of expertise under the overall leadership and direction of UNMEER. The Mission will also provide service to other international partners responding to the Ebola crisis through support for the national responses.