Question Of The Day: "I Like my Whisky Old and my Women Young" What is Solid Star Referring To? 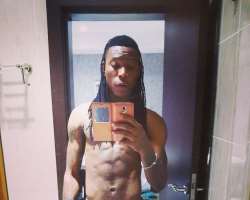 Nigerian male celebs love going to the gym which according to them makes them keep fit at all time. The likes of P-Square, Flavour Nabania, Iyanya, Lynxxx and many others alike. Interesting enough, they all do that for six pack purpose. While performing on stage, they tend to pull off their shirts just to flaunt it to the ladies who sometimes struggle to have a feel of their body.

Recently, slim fit reggae artiste, Solid Star, has joined the league of entertainers who try to keep fit by hitting the gym all the time. After frequent visits to the gym, the singer has taken to his social media page to flaunt his six packs like his colleagues too.

Aside just posting the picture, he also gave it a questionable caption which reads “I like my whisky old and my women young.” Maybe he means something else or someone can better explain these above caption by Solidstar.

Born Joshua Iniyezo on 8 November 1988, Solidstar hails from the Isoko minority ethnic group in Delta State, Nigeria, Specifically, his village is Aviara in Isoko South local government area of the state. He was born and bred in Ajegunle, but presently resides in Festac Town, Lagos.

The songwriter believes that 'the greatest songs tell the best stories and come straight from the heart to heal the people who listen.' This has affected him and thus shaped his distinct style. He calls his brand of music afro-pop.