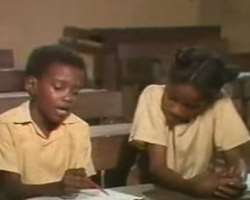 Handsome John Dumelo is the latest screen idol to set hearts racing amongst the Ghanaian and even Nigerian ladies. Following the frequent presence of the caramel complexion brothers on Ghanaian movie screens, John has been a breath of fresh air to emerge within the Ghanaian film industry.

The fine actor turned 30 years on Monday, February 3, 2014 but gave indications he was not ready to settle down with any particular woman any time soon.

A while ago, the tall, dark, and handsome dude posted a picture of himself in a movie set with his childhood girlfriend 23-years ago. Many of his fans have been wondering how he has been so active in the entertainment industry for so long and still waxing stronger.

He proudly shared the picture with the young girl in a classroom with the caption "On set of baby thief in 1991".

John is the only son and the youngest of three children. His first big break was when he was seven-year-old at Christ the King International School in Accra. It was at this school the producers from the GAMA Film company visited in 1991 to find children who would be suitable for roles in their film 'Baby Thief.' John and his older sister were some of the lucky few to be selected, with John eventually securing one of the lead roles in the movie as Saka.