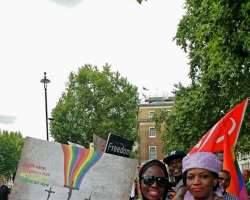 ELIZABETH WITH MARY
Listen to article

Yesterday his honour – Justice Abdul Kafarati finally ruled after 3 postponements on the Ebah application to have the Antigay law ( Same Sex marriage Prohibition Act) repealed. Mr Ebah a straight ally filed the claim on the grounds that it was unconstitutional and against Human Rights of Nigerian LGBTI.

Mr Justice ruled that Mr Ebah had no right to file the claim as he was a straight ally and not affected by the law and so struck the claim down., yet this is not the case according to the Fundamental rights enforcement procedure rules 2009 section e page 5, Mr Ebah as a straight ally and in the public interest can do so . ( you can see that law here : http://accesstojustice-ng.org/2009%20FREP%20RULES.pdf

Clearly the LGBTI community are disappointed . And it is clear that what the judge is saying in denying Mr Ebah from filing is that he wants the LGBTI community to come and file themselves. Recall that Goodluck was challenged at a NewYork event by a member of the LGBTI community and GEJ stated that they ( LGBTI) should apply to the courts to have their human rights assigned to them - all the time this claim was on going. Why would he make such a statement when there was already a claim in court? I think its entrapment as clearly the law states that anyone can file to have this law repealed . I would there fore urge the LGBTI Community ( Children of the Most High God) to resist and retreat until further notice , the Christian ones should carry on praying and taking of the Body and the blood of Jesus , until further notice, those that are not Saved accept Jesus as your Lord and Saviour .

Even if it was not entrapment how would it work? When we are persona non Grata under the law don't have a voice . Even during the slaving days, Wilberforcea white man had to do most of the work to get the abolition in place., as black people were not a people under the white mans law even today our voice is limited to a whisper ( see various laws in the West eg.UK Section 19 C of the Race Relations Amendment Act 2000, where Judges can discriminate against blacks and ethnic minorities in a court of Law even in the UK!)

I am not a lawyer just a born Christian that Jesus died for and Rose up again for., even for the rest of the LGBTI community. He blotted out the handwriting of ordinances that was against us and nailed it to His Cross ( Colossians 2:14) and Blessed are they that are not offended in Him or the Cross of Calvary. We that were not a people He made us His people and acceptable in the Beloved . If this was not the case all the black Christians in the world are thieves and robbers as Salvation is only of the Jews…unless of course Jesus grafted you in by paying your penalty price., this He did for the LGBTI community.

you can also catch the story here :http://www.gaystarnews.com/article/nigeria-court-dismisses-challenge-anti-gay-law231014