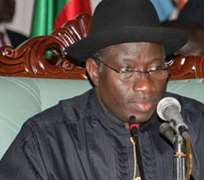 While the Minister of State II, for Foreign Affairs, Dr. Nurudeen Mohammed, was asked to take over as the Supervising Minister of Information pending the time a substantive minister would be named.

The position became vacant following the exit of Mr. Labaran Maku who resigned from the cabinet to enable him contest the forthcoming governorship election in Nassarawa State.

Mohammed announced the development to State House correspondents at the end of the weekly Federal Executive Council meeting presided over by Jonathan.

According to him, Jonathan also directed the Minister of Special Duties, Taminu Turaki (SAN), to act as the Supervising Minister of Labour and Productivity following the exit of Chief Emeka Wogu.

He said the Minister of Defence, Alhaji Aliyu Guasu, would combine his duties with those of the Minister of State, Defence following the resignation of Senator Musiliu Obanikoro.

Except for Onwuliri's deployment, all other appointments were in acting capacity pending the time new ministers would be appointed to fill the vacancies.