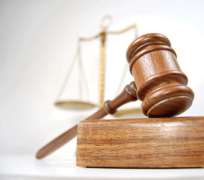 For several weeks, the Ekiti State judiciary has been under a siege that started following a case challenging the eligibility of the current Governor, Mr. Ayodele Fayose, to contest the June 21 gubernatorial election in the state. Hearings in the case that has now been practically stalled have resulted in high drama, closure of courts and imposition of curfew in the state. In the intervening period, violence was visited on judicial officers, court premises were violated by thugs while the National Judicial Commission (NJC) has had to wade in to restore some measure of sanity. Even though there is now a relative peace, the ugly political developments are bound to spell doom not only in Ekiti State but across the country if there are no investigations and the culprits brought to justice. As difficult as that may seem in the circumstance, to allow what happened to just pass is dangerous to the health of our system and the future of our democracy.


The whole drama started with a ruling delivered on September 22, 2014, wherein Justice Olusegun Ogunremi of the Ekiti High Court dismissed an objection filed by Governor Ayo Fayose challenging the jurisdiction of the court to hear the case against him. Thereafter, while the judge was in his chambers, thugs said to be loyal to Fayose (who was then governor-elect) invaded the court, molested some people while destroying and vandalising the court property. As if that show of shame was not enough, on September 25, another group of gangsters violently invaded the court of the Chief Judge and tore to shreds all available records. Thereafter they moved to Justice Adeyeye's court and openly assaulted him.


Without delving into partisan politics in the state, we unequivocally condemn the above despicable incidents. It is a big shame that a sitting judge would be physically assaulted and beaten up by political thugs in the full glare of the public while doing his work. We find it difficult to believe we have descended to the abysmal level where thugs would now be dispensing their brand of justice on judicial officers and within the precincts of court premises.


As Mr. Olawale Fapohunda, until last week the Attorney-General of the State, rightly observed, we must draw a big distinction between safeguarding the sanctity of the judiciary and partisan politics. We agree completely with him as it is incumbent on every society to protect sacred institutions like the judiciary because once it is allowed to be desecrated by politicians, the citizens are endangered.

The lesson that is often lost on our political leaders is that it is always advisable that aggrieved persons should approach the courts for redress while parties to a suit must maintain the status quo ante bellum pending the final determination of their suit. As we have repeatedly said in our previous editorials, the judiciary is the veritable third arm of government that acts as a vital thread that knits human society together. More importantly, the judiciary plays a pivotal role in the sustenance of democratic governance. Therefore, recourse to self-help or extra-judicial means in the settlement of disputes is an invitation to chaos and anarchy.


The emasculation of the Ekiti State judiciary calls for proper investigations and prosecution of the culprits. Happily the NJC has begun investigations into all the petitions submitted to it on the attacks on judges and wanton destruction of property. But now that he has been sworn in as governor, it is important for Mr. Fayose to understand that neither him nor his administration is above the law and that he should not do anything to undermine the administration of justice in Ekiti State. That is a sacred duty he owes his people.