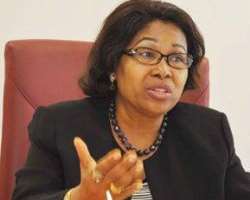 I actually did not realize that Senator Helen Esuene, as a female aspirant poses a serious threat to other gubernatorial hopefuls in Akwa Ibom State including Udom Emmanuel, the trainee politician from Onna LG, to warrant this heinous assault on her in Essien Udom. "Oh yeah, Mma is more powerful than Udom!' My friend had screamed in one of comely debates. That of course, that is indisputable! No wonder the fear! Those brainless criminals in Akpabio's courtyard should not be given another place to stay but a mental bedlam to undergo psychiatric evaluation and possible treatment before they turn Akwa Ibom State into another Sambisa forest.

If they go to Uyo, Eket and Oron axes, they will realize that thuggery and hooliganism are not the exclusive preserve of a given section of the Akwa Ibom clime. That, others have tended to exhibit civility in line with decorum and true democratic tenet which are the acceptable norms of a civilized society should not mean they cannot explode when pushed to the wall. Are the Essien Udim ragtag hoodlums trying to trumpet to the whole world that the lamp of civilization has not yet arrived their community? Has Governor Akpabio only transformed the physical landscape of Essien Udim but failed to transform their cognitive reasoning and mental development?

In 2011, Senator Udoedehe was almost lynched in that same domain, in spite of the salient fact that his wife came from that area, though they successfully killed and maimed a lot of people in that entourage and destroyed vehicles. The re-enactment of this brutish phenomenon is a pointer to the fact that no matter how you bathe a pig and dress it with costly costumes, it will still snooze and swim in the mud. That is what the Essien Udim castrated animals are trying to tell the world

The Essien Udim rascals can only see physical transformation but not the spiritual or mental renaissance which other Akwa Ibom people are seeing. They are seeing the physical because Akpabio has turned all what belongs to the good people of Akwa Ibom and stockpiled in their Local Government. I still have a pinch of salt if at all, they actually understand what is meant by physical transformation. This raffia cowards have the guts to range an assault on the amiable Senator Helen Esuene without recourse to the fact, Esuene being a woman, deserves their protection and nothing short of that. That they leave up to the promises to attack any aspirant that surfaces in their domain by using 45 and 48 calibre guns, machetes and raffia sticks gives me the impression that they were truly advised not to 'respect elders but take their own decision..' by Akpabio himself. Wait a minute, where did they get all these guns. Are the police, DSS not aware of the stockpiling of ammunition in this area? What action did the police take when these ammunition were first brandished and used to hack people from the Akpan Udoedeghe campaign team in 2011? Okay, I can hear you screaming with your croaked voices 'APC man"! Damn such! Did I tell you I belong to any party?

By the way, on whose behalf did the overzealous fag-end from Essien Udim attacked Senator Esuene ? Was it Akpabio's interest or Udom Emmanuel's? Or was it for both?. If that is the case, so are you telling me that Udom is afraid of a woman aspirant? Hahaha! Comic relief! So what will happen if hopefuls like Ambassador Assam Assam, Albert Akpan, Udonsak, Umana Umana, etc show up, will they deploy artillery from their armory to range against them?

Is the action of the Essien Udim miscreants a resonant of "Absaloms who seek power through back door will die"? If that is truly the case, can all the aspirants gear themselves up for such showdown; arm their supporters? Right? Is that what these ill-bred leaders of tomorrow from Essien Udim desire? What will Akwa Ibom look like if arms are freely utilized by all supporters of aspirants? For your information, if you forged anarchy in the state, even Akpabio, your chief warlord, will have no hiding place. Do you remember Augusto Pinochet, the Chile dictator? What happen to Abacha and the rest of greedy and callous dictators? Why is Mr. Akpabio so scared of an open contest? Why is he so afraid of free and fair election? Okay, he wants to govern by proxy after exiting the Hilltop Mansion in May 29, right? Or is he really afraid of the stinking skeleton in his large cupboard?

Udom could be a very potential candidate if he has opted to run alone without the criminal backup of Akpabio. After all, he has a towering background managing finances and economy of some sort before being coerced to come and run for what he does not even understand. So for anyone to try to paint a grim picture of Udom of any kind, does not really add up. Let Udom leave Akpabio alone and a show the people of the state that he is man enough to face the leadership challenge; be independent of any godfatherism and stop enjoying the governor's backing to the detriment of other contestants, as this is making him to court hatred from majority of the people. Okay, once again I can hear you screaming "Attah anointed his son in-law." Gushhhh! Victor Attah essentially tilted support to his son in-law in Bob Ekarika in 2011, but when the people of Akwa Ibom heckled him and said they want a leveled playing field, did Attah not withdraw his hands from the contest? Did Attah not give Akwa ibom people a choice of their own?

Okay, if you are yet to be gratified with that, is Udom not Akpabio's first cousin? I need to get that very clear! Why is Imperial Governor Akpabio so neck-deep with Udom candidacy, while shouting free and fair election? Why is he distributing ammunition to the youth to use and kill themselves while his brother are all occupying very sensitive positions in the government and sitting in their comfort? Justice???? Amkpa idem!

Nyong is a socio-political analyst from Akwa Ibom State.