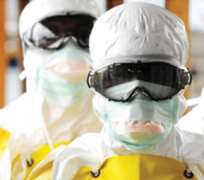 He made the disclosure while fielding questions at the 2014 ministerial press briefing in Abuja on Tuesday.

He said the volunteers comprised health workers, journalists and others.

Nasidi said Nigeria remained committed to supporting the control of Ebola spread in West Africa, hence the number of volunteers registered to join the fight against the disease.

The coordinator, however, did not give the exact date when the team would commence its assignment but said Nigeria was prepared to lead the international response team.

He said 'I want to announce to this gathering that over 600 Nigerian doctors, nurses, laboratory scientists, field epidemiologists and other categories of experts, including journalists, have registered to join the international team on Ebola.

'This strong team is an indication that Nigeria is committed to leading the fight against Ebola in West Africa.''

The NCDC coordinator said that the Federal Government's Treatment and Research Group had helped in developing a national response plan, stressing that implementation of the plan would soon commence.

He added that the national plan was conceived to help Nigeria to prepare in the event of an outbreak of the disease in any part of the country.

According to him, Nigeria now has a strategic plan in place that will guide workers in controlling any outbreak of Ebola and other emerging diseases in the country.

The coordinator said that the plan put together was in acknowledgement of the fact that Nigeria was still at risk of another outbreak of the disease.

He added that until the last reported case of Ebola in the world was brought under control, Nigeria would not relent in its efforts to combat the disease.

The Federal Government had offered the services of the coordinator of the NCDC to lead the international response team to other parts of West Africa. (NAN)