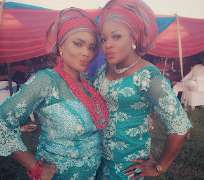 Nollywood actress, Iyabo Ojo, will begin the year 2015 in a more smiling note as the actress is currently going through her nine months journey.

Recently, the actress was tagged by some of her male fans as being rude and saucy, but she stated that it is because she rejects their love advances that is why and decides to create a fence between herself and some of them who want more than friendship from her.

Recall that recently, reports went viral that the actress new movie 'Beyond Disability,' was sponsored by the new man in her life. But the actress did not deny it rather, she revealed that her first produced English movie, 'Silence,' and the second which she just finished shooting 'Beyond Disability,' cost her lots of millions and were totally not her sweat alone as her new found love also supported her career.

Iyabo had explained that she decided to hide her man's identity because she does not want people to get involved in her private life which might cause a lot of trouble for her. “All I know is that I love my man, we have been together for a while. And I love to keep the relationship as private as possible.”

Well, the mother of two is actually enjoying her new found love as she will soon be increasing the family and help increase the population of Nigerians through her family. Congrats to her.

In a recent interview, the actress was asked if her attached tooth were part of her fashionable accessories and she revealed that she actually fixed a silver tooth and was not part of her style. She explained that she was forced to add the two siver tooth because she lost two of her teeth and they were very close to each other with a wide gap.