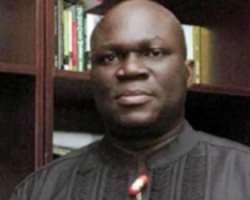 The Presidency on Thursday dismissed allegations of non-performance made by former Head of State and APC chieftain, Gen. Muhammadu Buhari (rtd), against the President Goodluck Jonathan-led federal government.

Buhari had on Wednesday in Abuja while declaring his presidential ambition alleged that the last 16 years of the Peoples Democratic Party (PDP)-led administration had witnessed a decline in all critical sectors in Nigeria.

However, the Special Adviser to the President on Media and Publicity, Dr Reuben Abati, said the allegations were irresponsible and did only badly reflect on the character of the opposition but also showcased Buhari's loss of touch with reality.

'We have noted with disappointment and regret, the reckless, baseless and unsupportable charges which he made against the Jonathan administration.

'We wholly reject the allegations made by the supposed elder statesman against this administration as an irresponsible denigration of Jonathan's sincere efforts over the past four years to sincerely and positively transform Nigeria.

'It reflects very badly on the character of the political opposition we now have in Nigeria, that a political leader of Buhari's stature will deliberately make such false and uncharitable comments about the elected leadership of his country, merely for personal and sectional political gain.

'The falsity of Buhari's anti-Jonathan and anti-PDP claims will be obvious to knowledgeable Nigerians and friends of the country.

'But for the benefit of others we will like to affirm that there is absolutely no truth whatsoever in his charge that 'the last 16 years of PDP government has witnessed a decline in all critical sectors of life in Nigeria' or that 'the economy continues to deteriorate'.

'Statistics and rankings from the National Bureau of Statistics, the Central Bank of Nigeria, the World Bank, the International Monetary Fund and other international economic agencies give the lie to Buhari's claims on the state of the Nigerian economy.

'As is well known, available figures, statistics and ratings show that the Nigerian economy has consistently maintained an unprecedented growth of six to seven per cent under the Jonathan administration.

'They also show that the Nigerian economy is now the leading economy in Africa and the 26th largest in the world with a gross domestic product of over 500 billion dollars per annum'.

Abati added that the country's agricultural sector was thriving under the reforms being implemented by the Jonathan administration contrary to Buhari's assertions.

He noted that current production figures showed that neither manufacturing nor commerce was 'down' as the APC presidential aspirant alleged.

The president's aide also denounced Buhari's 'uncharitable and inexcusable' claim that election rigging continued to thrive in the country under the present administration.

He said that all patriotic, objective and non-partisan citizens would reject that allegation because they should know it to be invalid.

Abati emphasised that there was abundant evidence to show that elections conducted under the Jonathan administration were progressively freer, fairer and ever more credible.

'Despite the other false accusations Buhari made against the president, who he clearly fears to take on in an honest, issues-driven presidential election contest, Jonathan will continue to carry forward his transformation agenda in the power sector and other areas.

'The president will not be discouraged or deterred from his objective of repositioning Nigeria for accelerated and inclusive socio-economic development by the partisan and jaundiced views of power seekers like Buhari who cannot see the obvious results of the current administration's efforts through their blinkered eyes.

'We also draw the attention of Nigerians to the total lack of originality in the hackneyed manifesto offered to Nigerians by the APC presidential aspirant.

'All that Buhari promises to do are already being done by the Jonathan administration to the acclaim of ordinary Nigerians and there is no evidence before Nigerians that the APC leader and his acolytes can do them better.

'The retired general is free to renege on his well-publicised pledge not to seek elective office again, as he has done, but we urge him to conduct his presidential campaign with greater regard for the truth.

'We also urge him to eschew unbecoming false accusations against others like a true elder statesman and to focus his campaign on more original ideas for the promotion of peace, stability, unity and progress in our beloved nation.'