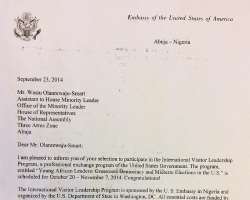 The IVLP is part of U.S foreign policy to enable emerging leaders in politics, the media, education, business and trade, nongovernmental organizations to exchange ideas and cultivate lasting relationships with their American counterparts.

According to a letter signed by U.S Ambassador to Nigeria, Amb. James Entwistle, and obtained by our correspondent in Abuja, the U.S has been funding the IVLP program to expose selected participants to activities of citizen action groups that interact with U.S elected officials, use of social media in the U.S political system and how diversity of views held by Americans contribute to a dynamic and resilient political system that includes free and transparent elections.

Olanrewaju Smart is also a former student leader at Lead City University and former UN model ambassador. Since foray to the National Assembly in 2012 as a legislative aide, he has been saddled with the task of providing background information for the drafting of legislation, gauging opinions and views of all levels of society on national issues, media relations, and advising the Minority leader of House who leads legislative debates on behalf of opposition political parties in parliament.

Olanrewaju Smart has offered interventions during periods of legislative logjam through his essays, “Lawmakers and Oil Benchmark Price”, “In Search for Legislative Prudence”, “Discourse on What Nigeria Can Learn from Latin America Pink-Tide”, among others.