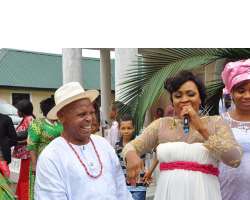 Nollywood actor Prince Eke, has decided rekindle fun memories of his twins dedication which was held in September, 2014.

Recall that at the dedication of his twins, Ceaser & Cleopatra, with wife, Muma Gee, the Jack Bauer of Nigeria as he is best described, was all dressed with his military inspired outfit which left heads turning.

During the dedication, singer, Muma Gee who happens to be his wife, performed at the occasion to the delighted guests who were in attendance but little was known about her performance that it was paid for.

Prince Eke revealed that he had to pay his wife Muma Gee, to perform a song for the kids which she gladly accepted.