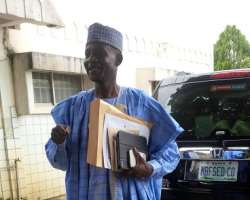 Dear Sir,
It is paramount i apologize to sadists and those who have worn the garment of 'shallowness' by interpreting that the Peoples Democratic Party (PDP) zoning that is supposed to give birth to the next governor from zone c(Niger North) is a fight between Kontagora and other minority towns within the zone. The friction between the two emirates and 8 local government councils of the zone over who becomes the next governor of Niger state come 2015 General Elections, I must say, is not cooking a nice meal with a pleasant aroma but a chaotic, yet sour political value system. Without a doubt I am writing to your political personality and leadership on the need for you to stand firm in order to unchain Niger State from the dungeon of DEMOCRATIC LACK. I have said in my previous build up of words that it looks like 2015 is the one chance for Niger state to truly acknowledge its democratic place in Nigeria and earn the respect of its slogan 'POWER STATE'.

Sir, the permutations indeed are rife. Perhaps the 2015 governorship elections in Niger State (ZONE C) is not about the urge for change, philosophy and ideas that form ideology towards good governance, but it is about the FEAR OF DOMINANCE with Kontagora as the Playmaker. This fear factor keeps clearly reappearing in the politicking sphere. Your Excellency, I don't have a single issue with the 'Son and Uncle' factor which I personally see as deliberate politicking to distract and draw sympathy to your nephew. I am also not a drunk Pro-Mustafa Bello fellow who wants to interfere in a family soccer game of this nature which is aimed at disdaining your brother's son. Moreover, it is all still within Nagwamatse, only that I feel your nephew is still too naïve to catapult the DEMOCRATIC SORRY FACE of Niger state to my desired atmosphere. Even if for nothing, at least I need a stable economy to stabilize my 'HUSTLE'.

The cryogenic belief of the far minority and close minority of the other towns apart from Kontagora are going further by unleashing more aspirants. This clearly and openly explains, it is a conspiracy of misconception towards the hunger of power and influence.

Sir, forgive me, but I need for the benefit of those who do not have a clear idea of the word 'CONSPIRACY', to be clear as I am sure they would appreciate if I dilute the word .Conspiracy, from my comprehension is a deliberate decision and action of a group of persons with a collective interest to sabotage a supposed situation against their interest. I believe that aside a fact that your name is a household name in the political clouds of Niger state, it is unfortunate that those who are to enlighten the electorate are the ones scheming dirty just for their naked desire for power.

Your Excellency though the political intrigues are on a high note, with the mud throwing of your sole achievements coupled with blackmails, it clear that none of the governorship aspirants and their sycophants can be in any sort of doubt as to your experience and accomplishments in all you have been entrusted with. This is why despite the perceived fear of dominance by the KONTAGORA'S in Niger North, they still cannot produce a credible alternative candidate.

I also need to make this clarification before you through this brief letter. I coined you 'THAT PERFECT GOVERNOR' of course not because you are perfect in the true definition of perfect but because during my discussions with your person, I came to realize you are not a self-serving politician so desperate to be in power. How can I be so carried away politically to lose my sense of reasoning? 'NO MAN IS PERFECT' . Sir, Nigerlites understand that man by virtue of his creation must surely make mistakes and have weaknesses in his actions; we all do. I am trying to ease the misinterpretation of the anti-Mustafa Bello apologist;so your being PERFECT in this circumstance is simply because you are seen as the only hope for a DREAM COME TRUE NIGER STATE democratically.

At this point Sir, the truth be told by separating it from the bag of falsehood that you are a reservoir of transformation and wisdom. One who has lived up to the task . If not you Sir, the leadership hiatus in Niger state cannot be filled in the next 8 years. You see, we all know that aside your politicking which is being played in a decent outfit and revolves around the common Nigerlite, your programmes and policies even from your forays are masses oriented; that, I can confidently vouch for.

Sir, how can a state like Niger over the years be feeding on a leadership style not too far from then South African Apartheid leadership in this 21st Century? Moreso, when states like Kano and Imo are busy building institutions and amenities to add value not to the strongest but to the society's weakest. I don't care if those states are APC states and this is because I came to figure out recently that it is not the party that is working but rather the heart and leadership philosophy of the leader ; and of course the political party will always want to enjoy such a glory.

As you prepare for your official declaration to contest as the Governor of Niger state in the forth coming general election, I say all the best and be rest assured that, my humble self will be at Hydro Hotel front seat on that Thursday, 16th of October 2014, at 11:00hrs. I made sure I collected my invitation letter to witness the birth of an exponent of technocracy.

A politician with ideas, as it was affirmed that ideas change the world and of cause ideas are greater than man, as assert.