The Difficult Options Before Bola Tibubu 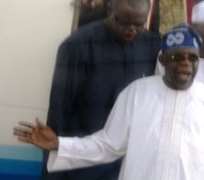 Being a kingmaker could be fun, but these are not the most exciting times in the life of Asiwaju Bola Ahmed Tinubu, the former governor of Lagos state and national leader of the All Progressives Congress (APC). In the next few weeks, or even days, he has difficult political decisions to make both on the national and home fronts as the 2015 general election draws closer and closer.

Any decision he takes has repercussions, and he will only hope that they would not harm his political standing at the end of the day. A pragmatic and calculative politician he is, but his battle-tested muscles will take a battering if he miscalculates his punches this time around.

At the national level, he still has not told his followers who to back for the APC presidential ticket. Some of his associates are confused, unsure of whose ambition to promote. Given the fact that Tinubu and his associates control a significant number of states whose delegates may cast the decisive votes in the presidential primary, everyone is agreed that he holds the ace in the race. Whoever he decides to make his “horse” available to will enjoy a good ride. Whoever has Tinubu's broom could sweep the delegates' votes.

But whichever candidate Tinubu backs, there will be one or two issues to deal with. Should he back General Muhammadu Buhari who evidently has the largest following in the north and, in my view, the best CV? The simplified arithmetic is that if you add Buhari's votes in the North to Tinubu's votes in the South-West, APC will win the presidential poll. It may not be that simple, though. Nevertheless, some in Tinubu's camp believe that supporting Buhari could harm him, fearing he could turn out to be the scapegoat of an anti-corruption war. The only insurance for Tinubu is to be on the train on a Muslim-Muslim ticket.

Or should Tinubu back Atiku Abubakar, an experienced politician with a broader national appeal and who is unlikely to rock the boat? Atiku has been a long-time associate of Tinubu, although Tinubu has hardly forgotten how Atiku left the Action Congress for the Peoples Democratic Party (PDP) in pursuit of a presidential ticket in 2011. His return to APC this year is being interpreted in negative ways, but the bigger worry for Tinubu is that if Atiku is pitched against Jonathan, there may be no defining advantage to be enjoyed by APC. Indeed, while Buhari can campaign as an anti-corruption agent, Atiku will have to choose a different topic.

Or should Tinubu back Aminu Waziri Tambuwal, the 48-year-old Speaker of the House of Representatives? He is a young politician and seasoned lawmaker, having been a member of the lower chamber since 2003. He could become the youngest elected president of Nigeria. No scandal has been linked to him yet, and he has managed to conduct himself without any stain since he became speaker in 2011. With the voting population predominantly youthful, Tambuwal can be sold as the new face of politics to the facebook generation. But does Tambuwal pack enough punches to knock out Jonathan? And will Tinubu take that gamble?

Or, finally to do the unimaginable should Tinubu back Jonathan for a second term? With PDP's aggressive troops massing around the South-West to launch a “surge” into the geo-political zone, the clear message to Tinubu is to “surrender or be captured”. Ondo and Ekiti have already gone to the PDP, while Ogun and Oyo are just hanging in there, with negative forecasts about APC's prospects in the next polls. Tinubu can go for a “tactical manoeuvre” and negotiate for the withdrawal of PDP forces from Oyo and Ogun and, in exchange, support Jonathan's re-election. That way, he could keep his political empire beyond 2015. The downsides: he would be tagged a traitor by his followers and, well, what if the PDP does not keep its own part of the bargain?

As if his predicament at the national level is not enough, Tinubu is also fighting a subtle battle at his backyard. His preferred candidate for the governorship of Lagos State is Mr. Akinwunmi Ambode, an accountant, experienced public administrator, and former accountant-general of Lagos State. Naturally, Governor Babatunde Fashola will have his own ideas on who should succeed him. Fashola would want somebody who has been part and parcel of his administration for the sake of continuity, but having been a beneficiary of Tinubu's against-the-grain choice of him as successor in 2007, Fashola will be a bit handicapped.

To be sure, Tinubu faced serious opposition when he picked Fashola. However, some will argue that Fashola understood Tinubu in and out and easily fitted into his shoes, carrying on with Tinubu's various infrastructural projects. The BRT, expansion of Badagry road, the clean-and-green evolution of the landscape and the Atlantic City, among others, were projects that Fashola participated in their conception, one way or the other. To carry on from where Tinubu stopped and actualise the plans was not that complicated for Fashola. But the same cannot be said of Ambode who has not been integral to Fashola's team.

Tinubu's real battle is not within the APC, though. He can always have his way there. The bigger battle is in the general election when APC comes against PDP, which is rumoured to be thinking of fielding Jimi Agbaje although Musiliu Obanikoro is putting up a stiff resistance. If PDP indeed fields Agbaje, who is seen in some quarters as “the other Fashola”, Tinubu will have to be at his best to retain Lagos State. Agbaje appeals to large sections of the young generation as well as the professionals. Like Fashola, he is a modern thinker. Without a doubt, Agbaje currently commands a bigger public profile than Ambode, who could do with more aggressive marketing by APC.

Tinubu's consolation would be that he has engaged PDP in four rounds of heavyweight contests since 1999, and has given them a bloodied nose each time. He has done it before so he believes he can do it again. But there is something called complacency that stage when you stop training for the big fight, sure that you will always floor your opponent no matter your current form and the state of your preparation. However, if PDP deploys all its arsenal to back a Jimi Agbaje, and APC is fractured at election time, it may not actually be a walk-over for Tinubu as most analysts would think.

And Four Other Things...

FINTIRI FAÇADE
There is no better ending for the speaker of the Adamawa house of assembly, Hon. Ahmadu Fintiri, than his ouster as acting governor and the truncation of his governorship bid on Wednesday. Ambition and desperation were written all over him as he masterminded the impeachment of Governor Murtala Nyako. He always sought to be the ultimate beneficiary. However, Bala Ngilari, former deputy governor who is now governor after the court verdict, has still not explained why he resigned in the first place, and though it was procedurally flawed, there is still something odious about his role in the whole drama. Bewildering.

BAYO OJO AGAIN
Remember Bayo Ojo, that Minister of Injustice and Attorney-General under President Obasanjo? In those lawless days, Ojo elevated himself above the Supreme Court, interpreting judgements his own way and plunging Nigeria into several constitutional crises. He is back to business. He was Ahmadu Fintiri's lawyer, and he said since he was going to appeal, the court judgement should not be obeyed. In law, an appeal is not a “stay of execution”. That is why appellants first file for a stay. To suggest that a judgement should be disobeyed because you INTEND to appeal is the height of anarchy. Irredeemable.

UP IN ARMS
The politicisation of the seizure of Nigeria's $15m in South Africa in the arms deal affair has made it difficult for some of us to comment. However, one issue is fairly clear: the official explanation is that we were seeking to buy arms through third parties after falling foul of strict pre-requisites required by Western countries. But one issue remains unclear: why go through a South African agent, given the cold war between the two countries after several fall-outs, notably over Cote d'Ivoire, Libya, African Union positions, yellow fever vaccination, xenophobic riots and Synagogue? Puzzling.

EBOLA PANDEMIC?
I want to make a confession: when cases of Ebola were being reported in Congo over a decade ago, I thought it was their problem. When, early this year, the virus hit Guinea, Sierra Leone and Liberia, I thought it was their problem too. It was when the disease came to Nigeria that many of us started thinking it could be our problem. Maybe that was what the rest of the world thought too. Now that the advanced countries are looking vulnerable with the US and Spain recording cases it is now everybody's problem. Lessons.