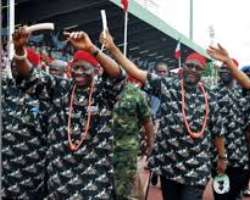 Next year's general elections have now thrown our nation into the eleventh-hour of high-level politicking. Politics and all else remotely related to it are now having a free run. Since ours is a country where realpolitik for the next election begins as early as the birth of a new term; you shouldn't be surprise seeing politics take the centre stage barely four months to the polls. All the preps which have been in the works since 2011 are now relentlessly unleashed on us by politicians. At the now, we are steadily being treated to all their guile and pretentions, not forgetting the magic they usually vow to do us should we give them our ballots.

This is actually a time when we get to see the industry in our supposed indolent political office holders and their collaborators. No, you can't hear about them holidaying in a time like this. Those among them with ailments more dire than the ones for which they would have jetted out to the best hospitals in the world, would at this time remain in the country to treat same here. Their peers who could not help but be hospitalized abroad at the moment keep reassuring us the improvements they are recording and how they would soon return to be with us. Who knows? This may be the reason we always hear of politicians collapsing in the middle of electioneering campaigns and rallies.

It is basically about the people, at this moment. So they go all out; sacrificing their health and wellbeing just to secure our mandate. This speaks to how rewarding and attractive our political offices are. They simply sacrifice themselves for the office which avails them the power to sacrifice us for themselves. Their office of interest is paradoxically one that hands its occupant the power of life and death; an office that extricates one and his unborn generation from the grip of poverty. How they love to serve! But we all know that the said service is such that sees them servicing themselves and a few cronies.

Their new-found diligence is just to one end: win over to their side voters who would allow them the opportunity of offering this corrupt form of service. They send foot-soldiers when their pretentions and current preoccupations wouldn't allow them to physically take up the responsibility. Of course, the errand-boys are always within reach. Some of them are so eager to do the job that they wouldn't mind allowing the actual job for which they are being paid by taxpayers to suffer while they take up the role of what the Igbo would call Otinkpu. Yet, what is at the heart of their advocacy for a particular candidate remains to sway support for their principal who is expected to handsomely reward them with juicy political offices. That's essentially Nigeria's version of democracy where the people are made to matter now only to be made to suffer once the elections are done with. A corruption of democracy, if you like!

They treat us with much indulgence in order to steal the most prized possession democracy hands us – our votes. They shamelessly come to woo the same people whose lot they have not helped to better all these while. Now the chickens have come home to roast, necessitating pleas for endorsements, new sets of promises, parleys, supply of stomach-structures or what have you to be thrown up. Again, the sole intent remains: make the electorates look past earlier broken promises into believing the new irresistible ones we have churned out. What a simpleton they think of us!

With all sense of propriety, it appears no other section of the country have taken in this lie like those of the South-Eastern extraction. But then, they may have elected to be gullible since they just can't seem to assert themselves and what they want in a hawkish Nigeria. This part of the country appears to be the first power-hungry leaders turn to whenever they want to continue in office. It is a common knowledge that Ifeanyi Uba, Udenta Udenta, Peter Obi are the masquerades behind the irritating TAN. Without going too far into history, we can take instances from the Abacha's, Obasanjo's and now Jonathan's quest to continue as president. Those who were always at the heart of the campaigns for these leaders continuity are mostly from the South East. Yet, it isn't as if the zone benefited the most from these governments.

It is against this backdrop that I was heartened when I learnt of Igbo leaders in Lagos turning down the request of a pro-Jonathan team who had come to lure them into supporting the re-election bid of President Goodluck Jonathan. Not even the fact that those who came for the advocacy were their kinsmen could make the Ndigbo leaders of thought buckle to their mission. They resisted and tried to, at least, stand their ground before the setting up of a committee saved the day. Don't worry we are getting there. I'm talking of the time when Ndigbo would stand by their conviction and not even concede to the setting up of any committee to get them to change their mind.

It bears clarifying that it isn't as if this writer is anti-Jonathan. The president can go ahead to win his much-cherished re-election for all yours sincerely cares. What is at issue is that one who has betrayed the confidence you reposed in him or her should spare you the torture of returning to you to ask you to trust him or her one more time. It even becomes more humiliating when the person in question sends your kin to come and woo the same you for him; reminds me of Absalom. Check out those carried the gospel: Anyim Pius Anyim, said to be representing Jonathan, Deputy Senate President, Ike Ekweremadu; Deputy Speaker, House of Representatives, Emeka Ihedioha; Senator Hope Uzodinma; Minister of Labour and Productivity, Emeka Wogu; National Publicity Secretary of the PDP, Olisa Metuh, Ifeanyi Ubah and Peter Obi.

These men who qualify to be protagonists of today's essay refused to be cowed notwithstanding the highly-placed nature of Jonathan's emissaries. Their insistence on not guaranteeing Jonathan their votes and those of their followers made the parley which began by 8pm to linger till the early hours of the next day. These men held that it was unreasonable for Ndigbo to work for the president again going by what is on ground.

Some of these issues on ground include the fact the much hyped Second Niger Bridge is under the Public Private Partnership (PPP) arrangement, meaning it would be tolled on completion for about 25 years, whereas a similar project in Benue State is being funded by the Federal Government and would not be tolled. They also whined about the Jonathan's government lack of commitment in creating a sixth state for the south east, even as they corrected that the so-called Enugu International Airport, which the Jonathan campaigners are mouthing as part of his achievements was approved by the late President Umaru Yar'Adua and not Jonathan.

The Igbo leaders raised a lot more issues which space will not permit the listing of all their dissatisfactions with the Jonathan's candidacy as far as 2015 presidential election is concerned. It was even reported that “Ndigbo in Lagos are considering changing camp and we will soon meet with Tinubu and Buhari on the way forward because we have lost it in the PDP.”

It is gratifying that the Igbo leaders are beginning to do what they should have been doing all this while. Had it been the zone was this reluctant in making available their bloc vote to presidential aspirants who had court them when elections are around the corner, its people would surely have got a better deal out of the Nigerian state. Bearing in mind the calculations being made by the major political parties regarding next year's presidential election, the South East zone seems to be the beautiful bride. It should thus continue making the most of the fact that it is a swing zone which would likely decide who wins next year's presidential election.

You can use the twitter handle @ugsylvester for further discussion on the subject of this essay.