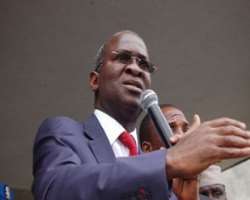 Lagos State Governor, Mr. Babatunde Fashola, on Thursday explained the idea behind his administration's initiative, 'Horn Free Day' coming up on October 15, 2014, describing it as a step towards sensitizing residents to the harmful effects of noise pollution.

Speaking at the State's first 'Lagos Drivers' Appreciation Day' held at the Lagos Chamber of Commerce and Industry House, Alausa, Ikeja, Governor Fashola said that the Horn Free Day was an initiative of his administration to persuade citizens that there is a better way to live than indulging in noise pollution which has been found to be harmful to their health.

Re-enforcing the remarks of the Guest Lecturer who put the harmful noise level at 70 decibels and above, the Governor said that there was need to bring this figure down significantly because according to the global standard for measuring noise, '90 decibels is rather too high and harmful to human health'.

According to him, 'What we see in a way that we now choose to live is that because we live in a very noisy environment, which we can really diminish, we tend to be very noisy ourselves. We speak at the top of our voices, we play music at very high decibels and we do very many things at very high levels'.

The Governor pointed out that the campaign against noise pollution was a response to the petitions and complaints of 'citizens and tax payers who, on daily basis, write and petition us that somebody is preventing them from sleep either from the noise they are making or from other uncharitable activities they are carrying on without regard for the well- being of their neighbours.'

He further recalled, 'Occasionally, when you hear a siren you know something has gone wrong in that system; you know that either an ambulance is on its way to an emergency or firemen are on their way to a fire or policemen are tracking and chasing criminals; and I said then that why should we be different, are we not Nigerians?'

Saying that such a change should start from Lagos, Governor Fashola expressed joy that the Ministry of Transportation and all its affiliated agencies, the Drivers' Institutes, the Transport and the Law Enforcement Institutes, have all taken the Horn-Free Day challenge up to the level of implementation.

He declared, 'We are gathered here today to sensitize ourselves in preparation for the day we have chosen as a Horn Free Day; the No-Noise day or whatever you chose to call it, but let us just bring down the noise in our society. On that day we will not be gathering like this. Each one of us and all of us will be consciously doing something to start this very exciting journey in order to reduce noise in our society'.

The Governor charged the audience, 'I want you to remember as we leave here today that starting from the 15th of October, whether we reduce noise or not starts from you and me. If you and I make the commitment to do something positive in order to reduce noise, clearly you and I will benefit'. - Channels.