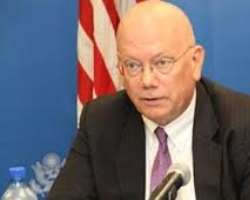 The U.S. Ambassador to Nigeria, James Entwistle, has debunked media reports that America was not doing enough in helping Nigeria to contain terrorism in the country.

Entwistle debunked the notion on Thursday at a news conference in Yola.

'I disagree completely with these headlines; they are quite inadequate. Our two countries have strong military relationship.

'Over the years, we share a lot of equipment; some of the newest vessels of your navy come from United States, so the idea that U.S. doesn't support Nigeria is not true,' the envoy said.

He said the support to Nigeria was in many forms, including training of soldiers and information sharing.

On his perception of Boko Haram, the ambassador said he was not sure of the group's objectives.

'There are still some open questions on who they are, what they want.

'A year ago, I would have said they were religiously motivated. But as they killed more and more Muslims, it's hard for me to believe that they were motivated by religion.

'Who are these guys and what do they want? I don't think we really understand them, ' Entwistle said.

He observed that Boko Haram had gone beyond being a small insurgent group, with a couple of guns, to very effective collection of conventional force.

'An open question we have to look at carefully is where is the military expertise ( for Boko Haram) is coming from. How in the last one year they became more effective?'

The envoy, who was  in Adamawa to monitor the suspended Oct. 11 governorship by-election, held talks with Adamawa Interfaith Committee, an NGO.

He also visited the American University of Nigeria (AUN), Yola, where he delivered a lecture to staff and students of the institution. (NAN)