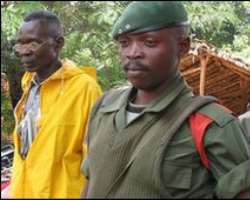 Soldiers now patrol in Tapili, where many people died

The killings took place last December but have not previously been reported.

Human Rights Watch says this is one of the worst massacres carried out by the LRA, whose fighters roam across several countries after spreading from Uganda.


He warned me because he is an Azande, like me
Jean-Claude Singbatile
The rebel leaders initially claimed to be fighting to install a theocracy in Uganda based on the Biblical Ten Commandments, but they now sow terror in Sudan and Central African Republic, as well as DR Congo.

In the latest attack, the rebels hacked to death villagers and made others carry looted goods. Some 250 people were abducted.

Jean-Claude Singbatile, 17, was captured with a group of friends and spent days carrying bags of salt.

“As we marched, the LRA killed people – two at one village, three at the next and then four at the next,” he told the BBC.

“They wanted to kill me, but the leader said I should be kept alive, as they needed strong soldiers.”

Eventually, one of the rebels warned him that he would also be killed and should take his chance and run for it.

“He warned me because he is an Azande, like me,” said Jean-Claude, referring to his ethnic group.

Posing as soldiers
The United Nations had heard rumours that an attack was to be launched around Christmas, and reinforced their troops in the area.


The son of our chief was among them, so we felt we had to give them a burial

Jacques Akoba
Red Cross volunteer
But they were deployed to towns like Dungu and Niangara rather than the remote villages where the killings finally took place.

On 13 December, a contingent of LRA rebels crossed the Uele river, before arriving at a market in the village of Mabanga Ya Talo.

Dressed in military uniforms, they pretended to be Congolese soldiers who had spent months in the forests and asked local people for food and other goods.

They then asked people to carry the goods back to where they had crossed the river, and when the villagers refused, the rebels turned on them.

Adults were attacked, captured, imprisoned in huts, then taken out and made to act as porters.

Anyone who was unable to keep up with the pace of the forced march was “left behind” – a euphemism for being tied up and battered to death with wooden stakes or killed with machetes and axes.

Those who refused or tried to escape were also brutally killed.

It was a pattern repeated in villages all the way to Tapili, some 45km (30 miles) away.

Shallow grave
Lt Jeanvier Bahati, a Congolese army commander in the Tapili area, was one of the first to arrive at the massacre site and helped to bury the dead.

“I saw with my own eyes 268 dead bodies, because we buried them – there was no-one else to do it,” he said.

Jacques Akoba, a Red Cross volunteer, said he buried seven bodies in a shallow grave 2km south of Mangada, along with nine skulls he found by the side of the road.

“We were scared as we were burying them, but the son of our chief was among them, so we felt we had to give them a burial,” he said.

Human Rights Watch, working with local groups, has verified 321 deaths – but other activists have given far higher estimates.

Witnesses say the stench of death hung over the area for weeks.

Children were a particular target of the LRA.
At least 80 were taken by force – boys to become fighters, girls to be used as sex slaves by LRA combatants.

Quite why they killed so many of their victims is a mystery.

Fear remains
“We don't understand what their strategy really is, but they clearly like killing, like destroying things,” said Father Joseph Nzala, the Catholic priest at Tapili.

Many villagers are still too frightened to go home, and they continue to live in a makeshift camp on the edge of Niangara.

Local people question why the UN, Congolese and Ugandan forces do not co-operate more closely to halt the LRA, who have now returned to their camps north of the Uele river.

Ugandan army commanders claimed they had all but eradicated the LRA after launching a joint operation with South Sudanese and Congolese troops in December 2008.

With logistical and intelligence support from the US, the operation was meant to kill LRA commanders, including its leader, Joseph Kony.

But the attack failed to achieve its aims and the LRA dispersed, attacking churches and villages during Christmas 2008.

The Congolese soldiers receive support from UN troops who have a number of small peacekeeping bases in the area.

“Rather than ignoring the facts, the governments of the region and UN peacekeepers should co-ordinate their efforts to protect civilians and develop a comprehensive strategy to resolve the LRA problem once and for all,” she said.