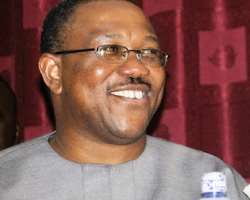 The former Governor of Anambra, Mr. Peter Obi, On Tuesday formally defected to the Peoples Democratic Party (PDP) from the All Progressives Grand Alliance (APGA).

Obi declared his defection while hosting some members of the PDP in the South-East, led by the Deputy Senate President, Sen. Ike Ekwerumadu to his Onitsha home.

Others in the team included the Deputy Speaker, Emeka Ihedioha; Secretary to the Government of the Federation, Sen. Pius Anyim, and the Chairman of the South-East Governors' Forum, Chief Theodore Orji.

The members of the Federal Executive Council at the ocassion were Chief Emeka Nwogu, Prof. Chinedu Nebo, Mr Osita Chidoka, Prof. Valarie Onwualili, among many others.

The National Chairman of PDP, Alhaji Adamu Muazu, represented by the National Publicity Secretary, Chief Olisa Metuh, said the visit followed a resolution by the South-East stakeholders to persuade Obi to join the PDP for more meaningful contribution to national affairs.

Metuh, said that PDP had never lost election in the South East, but to Obi as a person because of his integrity, forthrightness, hardwork and honesty.

Citing the recent defection to the PDP by Gov. Olusegun Mimiko of Ondo, Metuh said time was ripe for Obi to follow suit. Gov. Theodore Orji of Abia said it was not late for Obi to join the PDP and work at the centre for the good of the country.

He described Obi as a man of integrity, who came out strongly on issues and would be an asset to the country at the federal level.

'We are here today to discuss the future and progress of the South-East geo-political zone with our brother Mr. Peter Obi, who was the immediate Governor of Anambra.

'Having reviewed with him the state of the country and how it affects our people, we came to the conclusion that our interest in the country is better served when we remain together as brothers and sister under one party and speak with one voice.

'We all agreed that politics globally is dynamic and changes from time to time. In Nigeria, for example, we have moved from regional parties to regional politics, which requires our people staying together and speaking with one voice.

Deputy Senate President, Ike Ekweremadu, said Obi extended hands of friendship to everybody that would contribute to the development of Anambra when he was in APGA.

He said that Obi's demonstration of leadership, integrity, his friendship with the president and commitment to Nigeria prompted them to come and appeal to him to join the PDP.

Deputy Speaker, Chief Emeka Ihedioha, said the decision to appeal to Obi to join the PDP was a collective one while the Secretary to the Government of the Federation, Sen. Pius Anyim, expressed optimism that the forum would convince the ex-governor.

The former Chairman of the PDP, Chief Okwesilieze Nwodo said: 'In view of Obi's integrity, political sagacity, marvellous work in Anambra, stabilising influence on the Federal Government, we the leaders of the PDP, move the motion that you are the one we are waiting for in the PDP'.

The motion was seconded by the Minister of Works, Chief Emeka Nwogu, who said that Obi was one good man the PDP needed for his service to the president and the country at large.

Mrs Kema Chikwe, speaking on behalf of women, said Obi shared the same vision of a prosperous country with the PDP.

Responding, Obi said: 'I most sincerely appreciate this visit by people I consider as important political leaders from the South-East.

'I thank you for your continued belief and commitment to the welfare of our people and the progress of our country.

'I have in the past worked closely with all of you and you know my belief about our zone working together. I assure you that we will continue to work even closer as a team in the interest of our people.

'Regarding your visit of today, let me assure you that I heard your kind and passionate requests and that your journey would not be in vain but in the best interest of our people.

Obi said the issue of joining a national party was not about happenings in APGA, but because the need to be a competitor and not a spectator in national affairs.