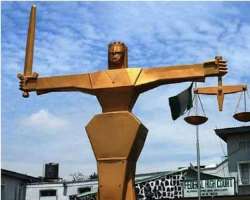 From the Head of Litigation, Bi-Courtney Group, Mr. Tola Oshobi, has refuted the claim by the Asset Management Corporation of Nigeria (AMCON) that Babalakin's companies are indebted to the corporation.

Oshobi, while addressing newsmen in Lagos Tuesday, said that the position of Bi-Courtney is that it is not indebted to AMCON, rather it is AMCON and its principal that are indebted to it.

Oshodi, who said that AMCON and its counsel have repeatedly, in daily publications, claimed that Bi-Courtney signed offer letter with AMCON, described the claim as outright falsehood. 'We have watched with bemusement the hysteria with which the AMCON and its counsel have repeatedly asserted in the daily publications and press interview that Bi-Courtney Ltd and associated entities have signed an offer letter with AMCON, which constitutes an admission of liability to AMCON in the sum of N50 billion. The bad faith, insincerity, breach of trust and outright falsehoods underpinning these statements and publications are being presented to the courts and the appropriate statutory regulatory bodies for investigation, resolution and appropriate sanctions and remedies.

'We firmly believe that the appropriate forum to address and resolve the dispute between Bi-Courtney and AMCON is the court of the land and not the pages of newspapers, it is necessary to respond to these statements so that innocent members of the public are not unwittingly misled by these misrepresentations of facts, half-truths and falsehood.'

He added that apart from other extenuating facts and circumstances well known to both AMCON and Bi-Courtney, as well as their respective counsel which make the purported offer letter  non-binding , it suffices for the time being to state that the offer letter being bandied around by AMCON and its counsel has five conditions precedent set out on pages three to four of the letter.

It would be recalled that Justice Ibrahim Buba of a Federal High Court sitting in Ikoyi, Lagos had, in a ruling on the matter, vacated an earlier order made by Justice Abang which had empowered AMCON to take over the assets of Bi-Courtney Group over an alleged agreed N50 billion debt.

Justice Abang had equally approved the appointment of former President of the Nigerian Bar Association (NBA), Olisa Agbakoba (SAN), as the receiver/manager over Bi-Courtney's assets.

But Justice Buba, in the ruling, upturned Justice Abang's orders, saying they were made in the face of previous orders and suits in respect of the subject matter, and so the orders amounted to an abuse of court process.

But not satisfied with the Order, AMCON, through its lawyer, Agbakoba, filed a notice of appeal at the Court of Appeal in Lagos, wherein he formulated four grounds of appeal.

According to the Notice of Appeal, Agbakoba argued that Justice Buba, 'Erred in law and misdirected himself when he heard and granted the oral application by lawyers to the Bi-Courtney Group to vacate the receivership, possession and freezing orders made by Justice Abang on September 22, 2014 without the application being fixed for hearing.'

Agbakoba also argued that Justice Buba, 'Erred and misapplied the law when he held that the orders of Justice Abang amounted to an abuse of court process, as the cause of action in the suit before Justice Buba was different from that, on which Justice Abang based his orders.

'The learned judge erred in law when he held that the discharge of the Ex-Parte Orders concluded the action and nothing further was required in the case and thereby came to a wrong decision.

'The learned judge erred in law when he set aside the Ex-Parte Orders of receivership, possession and freezing Orders granted by Justice Abang on 22nd September 2014, when, in fact, the oral application by counsel to the respondents was only for suspension of execution of the Orders pending the hearing of an application to set aside the ex-parte orders and thereby came to a wrong decision.'

AMCON therefore asked the Appellate Court to set aside the ruling by Justice Buba setting aside the orders of Justice Abang. - Guardian.