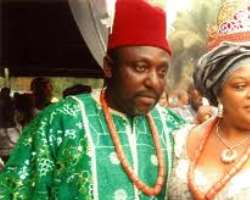 Governor Rochas Okorocha of Imo state is getting set for the marriage ceremony of his daughter, Uju and o course he is very happy about this.

His daughter Uju will be tying the knot with the son of Imo State government secretary, Prof. Anthony Anwuka this coming weekend. The traditional wedding of Uju and her boo, Uzoma Tony Anwuka will be holding on Thursday, October 9, 2014.

The church wedding will hold at the St. Joseph Catholic Chaplaincy in Owerri this weekend, October, 11, 2014. It could be recalled that Governor Rochas gave out his first daughter in marriage to Chief Uche Nwosu an official from Nkwerre LGA of Imo state.

There is no doubt that politics is here to stay in their family. Congrats to them.

Crack Ini Edo's Marriage? Allegedly Threatens Hubby, Philips Ehiagwina To Walk Out Marriage If Fed Up With Her?

Kayode Salako, Others Condemn The Killing Of UniPort Students...Lampoon Government

2face, D'banj Record A Song Together

'I AM CLOSER TO DBANJ AND NOT DON JAZZY' – IKECHUKWU