Chelsea too strong for Arsenal 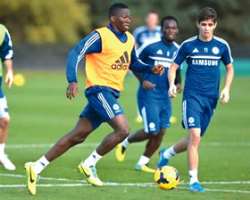 Chelsea moved five points clear at the top of the Premier League table with a hard-fought 2-0 win over London rivals Arsenal at Stamford Bridge on Sunday, Skysports reports.

The influential Eden Hazard set Chelsea on their way when he won and converted a penalty in the first half.

Diego Costa made the game safe with a second goal 12 minutes from time after being set up by former Arsenal captain Cesc Fabregas to maintain Chelsea's unbeaten start to the season and condemn Arsenal to their first Premier League defeat of the campaign.

After a quiet start Chelsea suffered a scare on ten minutes when goalkeeper Thibaut Courtois suffered a head injury after colliding with Alexis Sanchez, but after lengthy treatment the big Belgian was able to continue.

Things threatened to boil over on 20 minutes when Gary Cahill was fortunate to escape with only a yellow card for a dangerous tackle on Sanchez. The incident sparked an angry confrontation between Arsene Wenger and Jose Mourinho on the sidelines with the Arsenal boss shoving his Chelsea counterpart in the chest and the referee Martin Atkinson was forced to give the pair a ticking off.

Soon after Courtois was forced off to be replaced by Petr Cech as it seemed the goalkeeper had not recovered from that earlier head clash. Agency report