Community cries out to Chime over marginalisation 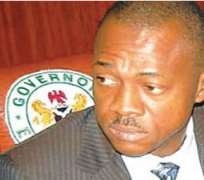 The people of Ohodo community in Enugu State has cried out to the Governor of Enugu State, Sullivan Chime for his prompt intervention over what they termed “deliberate political marginalisation” of the community by some elements in Igbo Etiti, LGA.

According to a statement issued on Sunday by the Chairman, Ohodo Welfare Association, Lagos branch, Mr. Matthew Ezeaku, he said that some people have orchestrated plans to perpetually subjugate and apparently send Ohodo to political extinction.

“Ohodo community is the third largest community in Igbo Etiti LGA both in population and voting strength, yet it is being sidelined in every political appointment and elective positions.

“Rather, all the juicy political positions are shared and dominated by Ukehe and Aku communities for decades. Presently, the local government chairman, Engr Festus Ozoemena (since 2011) is from Ukehe; the member representing Igbo Etiti and Uzo Uwani federal constituency  at the Federal House of Representatives, Mrs Stella Ngwu (since 2011) is from Ukehe; the Speaker, Enugu State House of Assembly, Hon. Eugene Odoh (since 2007) is from Ukehe. Also, the Executive Commissioner in the National Communications Commission, Chief Okechukwu Itanyi (since 2010) is from Ukehe, shortly after serving two terms as Deputy Governor under Chimaroke. The list is endless and has ever been so, as far as, the human memory can recall”, Mr. Ezeaku lamented.

“Meanwhile, the immediate past chairman of the local government, Mr Ogbonna Idike (2007-2011) hails from Aku; immediate past Federal Commissioner in the Federal Civil Service Commission, Chief Martins Oke is from Aku. It also has a commissioner serving the Enugu State Government presently, among other appointees,” he stated.

According to him, the first time an Ohodo man was appointed a commissioner in the state, he was regrettably dropped after spending barely two years for no reason other than the same act of conspiracy against him and the community.

“We passionately appeal to the Governor of Enugu State, Sullivan Chime, himself an apostle of fairness, equity and justice to address this imbalance, neglect and injustice perpetrated against us.

“As a people, we desire good representation in all tiers of government because we have eminently qualified sons and daughters that have the capacity to shoulder any responsibility. We are law abiding citizens and supporters of your administration. We crave for liberation from the political emasculation by those who have enslaved us over the years, ” he stated.