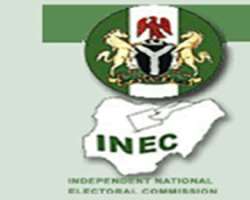 In line with the provision of the Electoral Act, the Independent National Electoral Commission on Wednesday formally gave a notification for the 2015 general elections to political parties, signaling its preparedness for the poll.

The Chief Press Secretary to the INEC Chairman, Mr. Kayode Idowu, said the commission is by the virtue of Section 30 (1) of the Electoral Act, 2010 (as amended) expected to issue a notice for the elections not later than 90 days before the date of the election.

He said the timetable for the election which had been released since the beginning of this year was not different from the notice to political parties.

According to the notice, the tenures of the office of the President, vice president, governors and deputy governors of all the states of the federation except Anambra, Bayelsa, Kogi, Edo, Ondo, Ekiti and Osun states and the membership of the national and state assemblies will expire on May 28, 2015.

INEC said, 'Consequently, the earliest date for the elections into the offices shall be December 29, 2014 and the latest day for election shall be April 28, 2015. By virtue of the provisions of the Constitution of the Federal Republic of Nigeria 1999 (as amended) elections into the said offices shall not hold earlier than 150 days and not later than 30 days before the expiration of the term of office of the last holder.'

INEC, in the notice, fixed the presidential and National Assembly elections for February 14, 2015 while governorship and state assemblies elections will take place on February 28, 2014.

While campaign by political parties for the presidential and National Assembly elections commences on November 16, 2014, campaign for governorship and states House of Assembly begins on November 30, 2014.

Collection of forms for all elections has been fixed for between November 4 and 11, 2014 for parties to issue to their candidates at INEC Headquarters.

'Run-off election to the office of the President or governor of a state (if any) will be held within 7 days after the announcement of the result of the election in accordance with the Constitution of the Federal Republic of Nigeria, 1999 (as amended),' the commission stated.