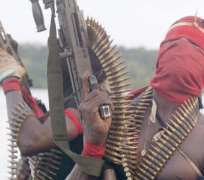 THEWILL gathered that the worker, Mr. Anthony Abiagomuwa Nwanze, was said to have been kidnapped Tuesday, 23 March, at about 8 pm around Ibusa area of Delta State.

Reacting on this latest kidnap, President of Petroleum and Natural Gas Senior Staff Association, (PENGASSAN), Comrade Babatunde Ogun, called on Delta State government and all security agencies in the state and its environs to do everything possible to secure the release of Mr. Nwanze, who he said is a member of PENGASSAN.

According to him, "we do not want what happened to our comrades, Danjuma Bashir and Malabu A. Ahmad, to happen to Comrade Nwanze. We are yet to come to terms with the killing of those two comrades. We are calling on Delta State government and all security agencies in the state and its environs to search and rescue him alive. We are concerned over the increasing threats, attacks, kidnaps and killings of innocent Nigerians, especially workers and oil workers in particular," he added.

Security in the Niger Delta region of the country remains a huge challenge to both federal and state governments despite reaching a peace deal with militants operating in the area.