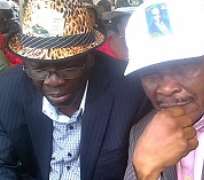 The immediate past governor of Imo State, Chief Ikedi Ohakim, has described the death of the husband to his former deputy, Chief Engr. Chilaka Okwuonu, as a monumental loss to Imo State and the nation in general.

Chief Ohakim made this remark when he paid a condolence visit to his former deputy Dr. (Mrs.) Ada Okwuonu at the deceased Owutu country in Ezinihitte Mbaise L.G.A. of Imo State recently.

While consoling Mrs Okwuonu and other members of the bereaved family, the ex governor described the late patriarch and Peoples Democratic Party chieftain as an exceptional icon whom he said would be missed by many.

He nevertheless assured the bereaved family of his support and prayers.

In a similar development, the former Nigerian Minister of Interior and All Progressives Grand Alliance governorship hopeful, Captain Emmanuel Ihenacho, has described late Chief Okwuonu as an accomplished engineer and a good community, political, and religious leader who dedicated his whole life to the service of God and humanity.

In a press statement from the Oil mogul, he described the death of the deceased as shocking and a great loss not only to the bereaved family but to Imo State and the nation at large.

He however, prayed God to grant members of the bereaved family the fortitude to bear the loss.

Meanwhile, the family of Late Chief Chilaka Okwuonu has fixed the burial of the former spouse to the Ex Imo Deputy Governor Okwuonu for the 31st of October, 2014 by 10am at St. Michael & All Angels Cathedral Ife Ezinihitte Mbaise L.G.A. Imo State.

In a recent statement to the public from the bereaved family, the remains of the deceased will be committed to mother earth on the same date shortly after the funeral service at the deceased country home in Orie-Owutu, Owutu Ezinihitte Mbaise.