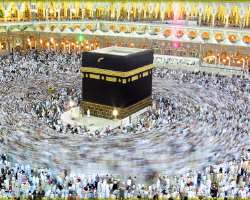 Ten Nigerian pilgrims in Saudi Arabia have died , according to the Coordinator of the National Hajj Commission in Mecca, Aliyu Tanko.

Tanko said Monday that at least 50,000 Nigerian pilgrims had so far arrived in Mecca with virtually all of them having performed the Umrah rites.

According to Tanko in a telephone interview  in Mecca,  the commission's three clinics and those set up by the various state pilgrims boards provide effective medical services to Nigerian pilgrims in Mecca.

He urged pilgrims to always seek medical advice before embarking on pilgrimage and warned them against exposing themselves to the harsh weather in the Holy Land.

Two lounges were provided at Jeddah airport to check African pilgrims for Ebola.  King Abdulaziz International Airport (KAIA) has the two lounges to receive pilgrims coming from Nigeria and some other African countries as a preventive measure against the Ebola virus.

'So far 118,000 pilgrims have arrived by air from Nigeria. There was not a single suspected case of the deadly virus among anyone of them,' said Abdul Ghani Al-Malki, the supervisor of haj affairs at the terminal.

According to him, aircraft coming from Nigeria are thoroughly checked to prevent the deadly virus.

''Emergency doctors and consultants in infectious diseases are participating in the execution of the plan in addition to qualified teams who are capable of checking the virus,'' Mr. Al-Malki said.

'We are particularly checking pilgrims coming from countries with reported cases of Ebola including Nigeria, Kenya and Congo,' he said.

The Saudi Kingdom has prevented entry of pilgrims from the Ebola-infected countries in West Africa namely Liberia, Sierra Leone and Guinea.

Meanwhile, with  the arrival on Sunday morning, in the holy city of Madinah, of Amiru-l-Hajj (leader), Oba Rilwanu Akiolu of Lagos and members of the 2014 Hajj Federal Government Delegation, the National Hajj Commission of Nigeria (NAHCON) has successful conveyed all intending pilgrims from Nigeria for this year's hajj to the holy land.

Over 75,000 Nigerians including those who employed the services of private tour operators will be participating in the spiritual exercise which will commence on Thursday, the eighth day of Dhul Hijjah, the 12th month of Muslim calendar.

Last week, the Saudi authorities announced the midnight of September 28  as  the deadline for the airlifting of pilgrims from all parts of the world to the holy cities of Makkah and Madinah.

Medview Air Special Flight No. VL3168 that conveyed  the Oba of Lagos and his entourage departed Abuja to Madinah at 10:20p.m. on Saturday with 253 passengers, all officials except one FCT pilgrim.

It was  the 140th flight since the  beginning of the airlifting operations on September 6 in several locations across the country. The 139th trip was Kabo Air KNE7271 flight which departed Kano to Madinah at 10:00p.m. with 496 pilgrims comprising 202 pilgrims from Kano and 294 pilgrims from Adamawa.

So far, a  total of 65,984 pilgrims have been airlifted by the NAHCON-accredited flight operators such as Flynas, Kabo Air, Max Air, Medview, and Skypower Express.

And in preparation for the commencement of the rites of hajj this Thursday in Makkah and its neighbouring towns, NAHCON will, on October 1, 2014 shut down the operation in the holy city of Madinah. NAHCON Coordinator in Madinah, Dr. Bello Tambuwal, told journalists on Saturday that the decision to close activities in Madinah became imperative to ensure the smooth movement of Nigerian pilgrims remaining in Madinah to the spots of the spiritual exercise in Makkah and its environs.

On Thursday, all pilgrims will camp in Mina, the outskirts of Makkah for an onward movement to Arafah on the following day,  October 3.  Converging on the plain of Arafah from sunrise to sunset on ninth of Dhul Hijjah (October 3) is a fundamental rite of hajj without which the spiritual exercise is null and void. October 4 is Eid-l-Adha (feast of sacrifice).

During the informal briefing, Tambuwwal expressed the determination of the Federal Government through NAHCON to ensure stress-free exercise for Nigerian pilgrims. This, he noted, was in line with the high-level improvement, especially in the area of infrastructure upgrade that the Saudi authorities had continued to embark upon. The coordinator mentioned the introduction of feeding (dinner) of pilgrims in Madinah,  the procurement of standard accommodation as well as good conduct among pilgrims as some of the areas where tremendous improvement had been recorded.

'Now, our pilgrims are accommodated in five-star hotels very close to the Haram (Prophet Mosque). Also, we have drastic reduction in the rate of untoward behaviours by pilgrims from Nigeria due to massive awareness programmes executed by various welfare boards in all the 36 states and the Federal Capital Territory (FCT) in Nigeria and in Saudi here. Our pilgrims are no longer missing because they live within 500 meters radius to the Prophet Mosque, and the perennial clash between Saudi security operatives and Nigerian pilgrims has also vanished during this year,' Tambuwwal said.

He praised the Saudi authorities for consistent lifting of the standard of the exercise. 'Since 2011 edition, the rail system has reduced the problem associated with moving a large number of pilgrims especially from Mina to Arafah and from Arafah to Muzdalifah.  A train now conveys pilgrims from Europe and Asia to Arafah with ease within the very shortest time. And there is now a dedicated route for Nigerian pilgrims that under 15 minutes, they move from Arafah to Muzdalifah. Already, there is a 30-year plan to expand airport facility in Madinah as well as  the expansion of  the rail service to all parts of the cities - Jeddah, Makkah and Madinah - that are connected to hajj operation for hitch-free conveyance of pilgrims.'

Most countries of the world, including Nigeria, Tambuwwal said, 'have keyed into the uplift project being embarked upon by the Saudi authorities.' And Nigerian pilgrims have also shown appreciation for what NAHCON has done so far. The feeding initiative as well as proximity of their hotel accommodation thrill them greatly.

Alhaji Ayinla Babatunde Oniyeye from Kwara described the new feeding arrangement as a welcome development and wished it extended to other meals such as breakfast and lunch. 'We are very grateful to the Federal Government for the new arrangements and we pray that Allah should continue to guide them in all undertakings,' said Oniyeye.

'Accommodation in Madinah is fantastic. We thank Allah for giving our officials the vision to do this. Every pilgrim is comfortable with the arrangement. It is very close to the Holy Mosque. Reports in the past indicated travail that our pilgrims encountered as they were quartered in low-standard hotels that were also far away from the Haram,' noted Aminu Yahya. Similar satisfaction was expressed by Ibrahim Hassan from Adamawa and Ahmad Garba Abubakar from Plateau State.

Idris Abdul Rahman, an official of NAHCON working directly with Lagos State pilgrims made further clarification on the new feeding formula, insisting that the programmes had boosted the welfare of Nigerian pilgrims in Madinah.

A visit to Wakan Hotel yesterday by The Guardian confirmed some of the remarks made by the pilgrims and officials of NAHCON.

Situated on King Abdul Aziz Street, the imposing edifice is just about six minutes walk away from the Holy Mosque. Pilgrims from Lagos, Plateau, Adamawa, Kwara and Kogi states live in the five-star hotel. They were in high spirit as they discussed in groups the preparation for the main rites of Hajj which commences two day. Agency report