REVEALED: THE FORCES AGAINST ORONSAYE …WHY EFCC IS AFTER HIM 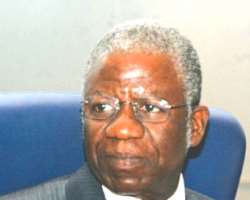 REVEALED: THE FORCES AGAINST ORONSAYE
…WHY EFCC IS AFTER HIM
● THE NFIC, PRESIDENTIAL COMMITTEE REPORT CONNECTION

Impeccable sources within the Economic and Financial Crimes Commission –EFCC, who spoke on the grounds of anonymity revealed that the recent negative media reports on Mr. Oronsaye were sponsored by cronies of the present leadership of the Commission.

Perplexed by recent media trial of a senior citizen, one of the sources described the development as an unfortunate desperation to achieve selfish objectives.

According to him, “this is not fair. It is not the first time. The other time, it was a report alleging that he was involved in a N6.2b pension fund diversion while in office as Head of Service, among others. The latest is that the Auditor General's Report indicted him for N123billion fraud. These things are all stories concocted to tarnish the image of the man seen as the backbone of the move to separate the Nigerian Financial Intelligence Unit from the EFCC, thereby giving it autonomy.”

“Do they think that Nigerians are fools? How come an “alleged case of fraud” claimed by the people that manufactured the story was kept in the shelf until when the move to establish the Nigerian Financial Intelligence Center-NFIC reached an advance stage; or was it kept as a weapon for blackmail against the elder statesman?” Is Premium Times and Sahara insinuating that EFCC cannot undertake any credible investigation without rushing to the newspapers? Are trials in Nigeria now executed on the pages of newspapers?”

Adding his voice, another source within the Commission confirmed the revelation, adding that Mr. Ibrahim Lamorde, the EFCC Chairman “is very bitter with the former head of Service for backing what he sees an offensive move.”

According to him, “This is a set-up to tarnish Mr. Oronsoye's name. It may be recalled that Mr. Oronsaye, as the former head of Service personally wrote a letter reporting the Pension Reform Task Team (PRTT) findings to EFCC, which resulted in the prosecution of one Mrs. Chidi and others.”

“Surprisingly, after the EFCC closed investigations in the Pension case in 2010, arraigned the subjects in 2011, obtained a “negotiated judgment” on one of the pension suspects in 2013, the Chairman of EFCC in an obvious show of incompetence sought to reopen the investigation by claiming that one of the suspects “wrote an additional statement” to include Mr. Oronsaye.

“Note that Mrs. Phina Chidi is the lady who has been covering her face in all the pension trial cases. This is a woman whom, investigation reports showed glaring evidence of her involvement in moving money from pension accounts using “her under-aged children”. How can a woman who ought to have been convicted all of a sudden become a star witness for the EFCC? Was she under duress after three years to forge a story against Mr. Oronsaye? Why now? Nigerians are not asking questions. I work here; I am involved and we know what is happening.”

“We are all aware that Mr. Oronsaye started the investigation of Pension fraud when he became head of Service. He set up the Pension Reform Task Team (PRTT) before he retired in 2010. He also personally submitted the final report of that task team to EFCC and ICPC and invited them to investigate and prosecute those indicted before he retired. How come the complainant is now being witch hunted? Instead of prosecuting all those found guilty, EFCC is now turning to claim that it has evidence to prosecute Mr. Oronsaye –forged evidence generated by his 'selected investigators' from the North, including Mr. Mustapha Abdurrahman and Mr. Mustapha Gadanya, a younger brother to Mr. Tahir, who, not only was a staff of Mrs. Chidi, but who has been dismissed from civil service for conspiring with Mrs. Chidi to steal Pension fund? Why is EFCC making a charade of such an important case. As an insider, I feel pained, but we are helpless?”

Championing the NFIC Bill
The move to establish the Nigerian Financial Intelligence Center that will be responsible for the receipt of information from financial institutions and designated non-financial institutions, analysis of the financial information for the purpose of turning this information into financial intelligence and dissemination of the financial intelligence to all law enforcement agencies is the issue that has been the thorns in Mr. Larmode's flesh! He has vowed several times that he will do whatever it takes to prevent the Chairman of the FATF Committee, Mr. oronsaye, and the members of the Presidential Committee from complying with international and regulatory requirements on the establishment of FIUs globally. This is an act of treason against Mr. President who personally endorsed the NFIC Bill and forwarded it to the National Assembly.

“To underscore the link between the media attacks and the NFIC, a study of the trend of newspaper publications by EFCC as alluded by Premium Times and Sahara reporters speaks volumes.”

“The latest report was published the very week the National Assembly resumed, knowing that the House of Representatives is expected to pass the NFIC Bill upon resumption, since the Senate had earlier passed it. A stakeholders Roundtable on the proposed Proceeds of Crime/Assets recovery Bill, being put together by the Presidential Committee is also underway. These Bills are seen by the EFCC present leadership as offensive. The last time when the Public Hearing and the Retreat of the Joint Committee of the Senate and House of Representatives Committee on Drugs, Narcotics and Financial Crimes was about to meet, the sponsored report of the N6b Pension scam was released by EFCC media spokesman. All these are aimed at discrediting Mr Oronsaye, tarnish his image, get him removed as the Chairman, Presidential Committee on the Financial Action Task Force and ultimately kill the Bills.”

Further checks revealed that Mr. Oronsoye as chairman of the Presidential Committee on the Rationalization and Restructuring of Federal Government Parastatals, Commissions & Agencies recommended the merger of the EFCC with ICPC and has been in support of the autonomy of the Nigerian Financial Intelligence Unit, a unit presently under the EFCC which has been battling the Commission for autonomy.

The bill- Nigeria Financial Intelligence Center has been passed by the Senate and is expected to be passed by the House of Representatives.

Premium Times is funded by the EFCC through the Executive Director Dapo Olorunyomi, chief of staff to former EFCC boss, Nuhu Ribadu. Dapo Olurunmi has also been linked to Sahara reports as the friend of Mr. Sowore who publishes only what EFCC gives him to publish.

It would be recalled that Nuhu Ribadu as the Chairman of EFCC fought the recommendation for the separation of NFIU from EFCC, and Mr. Larmode, a puppet of Nuhu Ribadu has continued from where he stopped. Till date, Mr. Dapo is still under EFCC's payroll.

All efforts to reach the EFCC spokesman, Wilson Uwajuren for comments proved abortive, as his lines could not be reached.