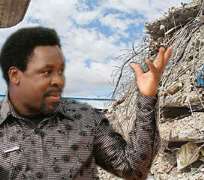 Two South Africans who lost relatives when a church hostel in Lagos collapsed have told the BBC they intend to sue the General Overseer of Synagogue Church of All Nations, Pastor Temitope Joshua.

The BBC reported that the two men, who both lost sisters in the collapse, were appealing for more families to come together in bringing a case against the preacher.

At least 115 people, including 84 South Africans, died when the multi-storey building fell down on September 12.

The authorities said it had more floors than its foundation could hold.

On Sunday, Joshua announced plans to travel to South Africa to visit the families of the deceased.

Emergency workers alleged they were prevented from participating in the rescue, only gaining full access to the site on Sunday afternoon. But Joshua had denied these accusations.

'I understand that some families are afraid to take on someone who purports to be God's messenger and I don't blame them but I will do this,' Thanduxolo Doro, whose sister died in the Lagos collapse said.

Thanduxolo Doro and Mpho Molebatsi waited at Johannesburg's OR Tambo airport for days after the collapse for news of their sisters, who had been visiting SCOAN.

Both families had last heard from their relatives hours before the collapse.

'It is not that the building collapsed, rather what was done after the collapse - we didn't get any news from the church,' Doro, whose sister Vathiswa Madikiza died, told the BBC.

'When I contacted them they wouldn't tell me anything. We saw reports that emergency workers were denied access initially, access that could have saved lives. The actions of the church after the incident are very telling,' he said.

'I need to do this for her. Even if I stand alone, I am determined to see that something is done,' he told the BBC.

'I understand that some families are afraid to take on someone who purports to be God's messenger and I don't blame them but I will do this,' he said.

Doro said he was informed by South African officials about his sister's death this week, but had to wait for the results of the DNA tests before her body could be repatriated for burial. Agency report