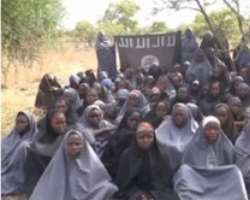 One of the female students, named Susan, who was abducted by the Boko Haram sect from Government Secondary School, Chibok in Borno State last April, was found by the police in the early hours of wednesday in Mubi, Adamawa State, two days after she was thrown off a truck by her captors, THISDAY has learnt.This is just as the Defence Headquarters (DHQ) wednesday confirmed the death of an insurgent, who it claimed had been impersonating the leader of the terror sect, Abubakar Shekau, for over a year.

A senior police officer in Mubi confirmed that the girl was dropped off near the Divisional Police Headquarters in Mubi by locals who discovered her after she was thrown off a truck that was being used by insurgents to escape from Nigerian troops.

He said when the girl was found, she was incoherent, and had scars and injuries all over her body because she had been battered by her assailants, and left by the road by locals near the police station.

The police officer said Susan is one of the 219 Chibok girls, whose abduction had attracted the attention of the international community and a global coalition to find and rescue them.

He said the girl had old and fresh wounds and scars all over her body, with swollen legs because she had walked a long distance for two days after being thrown off the truck by her abductors.

“She had old and fresh wounds and her legs were swollen, may be because she trekked a long distance, and you could see marks on her body where she was mercilessly beaten by her abductors, I believe,” the senior police officer volunteered.

Another person, who identified himself as Mallam Musa, also informed THISDAY that the police yesterday morning found a young girl stranded on the road, near the police station.

He said the girl had fresh and old wounds on her body, adding that she had obviously been beaten and maltreated.

Musa said the young girl might have walked from Sambisa Forest, the enclave of the dreaded Boko Haram insurgents, which transverses Adamawa and Borno States.

A security source in Mubi, also said he was certain that Susan is one of the kidnapped Chibok girls.

Efforts to reach the Nigerian Army Public Relations Officer, Captain Nuhu Jefaru of the 23 Amoured Brigade in Yola, were not successful, while the Public Relation Officer of the Police Command in Yola, Assistant Superintendent of Police, Michael Haa, said he was yet to receive any information on Susan.

However, the leader of the Bring Back Our Girls (BBOG) group and former Minister of Education, Mrs. Oby Ezekwesili, in elated late night tweets, confirmed the discovery of Susan

Tweeting from her twitter handle @obyezeks at 11.17 pm, Ezekwesili announced the news of Susan's rescue.

This came barely three hours after Ezekwesili had granted an interview to Aljazeera about the missing girls and the struggles of the BBOG group.

She wrote: “After the emotional upheaval of yesterday's (Tuesday) dashed hopes, today came with the factual return of one of our 219 #ChibokGirls. She's in trauma.

“It is hard to comprehend the return of Susan who is yet incoherent. The locals that found her took her to Mubi Police and now moved to Yola.

“The eternal optimist that I am makes me see the return of Susan as a good sign for the rest of our 219 Chibok daughters. They shall return!!

“One hopes that our security/military would approach Susan's return in a way that helps us learn more in the next couple of days.”

Giving more insight into Susan's discovery, another member of the BBOG group, Ms. Hadiza Usman, informed THISDAY that the young girl was traumatised and incoherent when she was found by the police in Mubi.

She revealed that one of the Chibok parents travelled to Mubi and identified her, adding, “She has been moved from the Mubi police station to the Yola Police Command, following which she would be taken to the hospital this morning.”

She said the authorities tried to stabilise her so she could be debriefed, expressing hope that Susan's release would give the security agencies some insight as to where other Chibok students who were kidnapped with her are held captive.

Meanwhile, the Nigerian military yesterday confirmed the killing of Shekau's imposter after a fierce battle for the control of the key town of Konduga.

Konduga is 35 kilometres from Maiduguri, the Borno State capital, and was repeatedly attacked by Boko Haram terrorists this month as they tried to take over Maiduguri in their bid to carve out an Islamic Caliphate.

Making this known during a press briefing at the DHQ in Abuja, the Director of Defence Information (DDI), Major-General Chris Olukolade, gave the real identity of the downed terrorist leader, who appeared in the Boko Haram videos as Shekau's double, as Mohammed Bashir.

He said Bashir (Shekau), who has other nicknames, including Abacha Abdullahi Geidam and Isa Damsaka, among others, was killed alongside other top sect commanders after five days of ruthless fighting in Konduga that lasted over five hours on each occasion.

The DHQ spokesman insisted that the original Shekau was dead but had been turned into a brand name, which any of his doubles such as Bashir could use to continue with their terror activities.

He said: “It is noteworthy that the terrorists made not less than four attempts between September 12 and 17, 2014 to violate the security and enter Konduga to perpetrate their atrocities. Air and land forces were subsequently deployed to handle the situation.

“The troops captured some of the terrorists and their equipment. In the course of those encounters, one Mohammed Bashir who has been acting or posing in videos as the deceased Abubakar Shekau, the eccentric character known as leader of the group, died.”

Olukolade explained that since “Shekau” had become a brand name for the terrorist leaders, the Nigerian military would remain resolute to serve justice on anyone, who assumes that designation or title as well as on all terrorists who seek to violate the freedom and territory of Nigeria.

He said on restoring normalcy after the encounter that killed the Boko Haram henchman, the people of the community “who were victims of terrorists' activities, corroborated information on the identity of Shekau's double”.

Consequent upon the death of the Boko Haram commanders, Olukolade disclosed that an additional 133 terrorists on Tuesday evening surrendered along with their weapons to Nigerian troops around Biu Local Government Area.

“A group of 88 submitted themselves at Mairiga/Bunu-Yadi, while another group of 45 terrorists were taken in around Mubi-Michika in Adamawa State. They are all being interrogated and processed in conformity with the dictates of standard best practices,” he said.

The Defence Spokesman commended the gallantry of Nigerian troops, who he said, “have remained undaunted and professional in prosecuting this campaign against terror.”

He also commended the contribution of Nigeria's international allies in the war against terror and assured them of the Nigerian military's resolve to maintain the momentum in the effort to “decimate and defeat the terrorists”.

He however reminded all citizens of Nigeria and her allies on the need for more vigilance and cooperation with the security forces.

“Everybody is required to remain alert to ensure that we are not taken unawares by terrorist elements who might want to carry out isolated attacks in any part of our country,” he said.