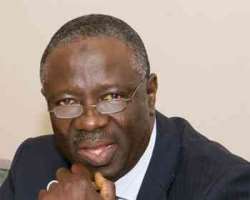 It is obvious that Nigeria is blessed with enormous talents in various sports but the major challenge to administrators is how to identify, groom and expose these talents to attain their full potential.

Having a very good, knowledgeable sports minister has been a major problem in Nigeria for over 10 years. Since May 1999, when Chief Olusegun Obasanjo came to power, sports have been on the back seat in the polity. It was learnt that the ruling party, the Peoples Democratic Party, zoned the leadership of sports to the North Central. The states under this region are Kwara, Benue, Kogi, Niger , Plateau and Nasarawa. Between 1999 and now, all the sports ministers we have had came from this region and this region has no pedigree in sports in Nigeria. For example southern Nigeria has dominated sports in Nigeria over the years and one wonders why the PDP did not zone the leadership of sports to any of this region.

Again, with proper search, the same North Central has people who know sports but the ruling party do not regard sports to be a serious matter yet they love to enjoy the good image sports gives the country especially outside Nigeria.

Between 1999 and 2007, continuity and ignorance were the major problems we were confronted with at the highest level of sports administration. People, who have no knowledge of sports, miraculously became the minister of sports. They spent time to know what to do and draw the country back with the bad decisions they make along the line.

By the time they (the ministers) begin to understand sports, they would have been redeployed to other ministries or removed completely. In the past 20 years, no sports minister has spent four years as the number one person in the ministry. Continuity is important in sports because people cannot think the same way to achieve a particular goal.

It is sad that many ministers before the Yar'Adua regime are ignorant of what it takes to develop sports. Some do not even know the athletes or the problems of sports. All they do is to follow football and make noise about football matters with no plan to develop other sports.

Before the Beijing 2008 Olympic Games, former sports minister, Abdulrahman Gimba, did not know the importance of participating in Olympic trials. The country's athletes missed many qualifying competitions especially in combat sports.

Gimba also did not even know the importance of hosting the 2009 FIFA U-17 World Cup. He worked so hard to ensure Nigeria did not host but the country eventually hosted after he was removed from office.

However, we all celebrated the appointment of Sani Ndanusa as the minister on December 17, 2008. The reason was simple. Ndanusa as a serving President of the Nigeria Tennis Federation, was tipped to boost other sports. Did he do it?

I wish to leave that to you, dear readers, as I state my views on the Ndanusa tenure.

It was a big shame that the tennis boss also fell victim of the 'craze' for football and was consumed with the happenings on the football scene to the detriment of other sports.

Ndanusa was all over the place for the 2009 FIFA U-17 World Cup Nigeria hosted and he was also a member of the Presidential Task Force for the qualification of the Super Eagles for South Africa 2010 World Cup. The projects would still have been successful had Ndanusa not abandoned other sports.

I am aware that Ndanusa met a blueprint for sports prepared by the NSC Director-General, Dr. Patrick Ekeji, on his table. What happened to that document? I also know that mini-sports centres are being erected in some parts of the country. It would have been great for him to inaugurate some of these centres but perhaps he did not take them seriously because of his attention on football.

Tennis is one sport after my heart. I met Ndanusa as the NTF president over five years before he became minister. I hereby challenge Ndanusa to come out and tell Nigerians what he did for tennis as a minister in over 15 months. Too bad. No tournament for players, no deliberate plan to help the sport attain greater heights and no exposure for talented players to enable them to break into world-class cadre.

We were excited with the appointment of Ndanusa because of his background but looking back, his tenure was a disappointment. Big time!

The government also has its problem. For instance, the new sports minister will be the third in this regime that is less than three years in office. Haba! God help Nigeria.