Yar'Adua off to Saudi Arabia for Medicals 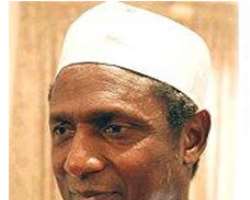 Barring any last minute change in plans, the gridlock over the presentation of the 2010 budget will be broken at 10a.m. today as President Umaru Musa Yar'Adua will present the vital document to the National Assembly by proxy.

Meanwhile, the president last night left Nigeria for the Kingdom of Saudi Arabia for medical check-up. This is said to be a follow-up to a similar check-up in that country last August, during which he performed the lesser Hajj, according to a statement from the Presidential spoke-sman Mr. Olusegun Adeniyi.

And in another development, an Abuja court yesterday gave members of the House of Representatives the go-ahead in their suit to resolve the issue of supremacy between the two chambers of the National Assembly. The president's Special Adviser on National Assembly Matters, Senator Mohammed Abba-Aji, supported by the Special Assistant to the President (Senate), Dr. Cairo Ojougboh, will lay the budget before the Senate this morning.

Thereafter, Abba-Aji, in company with the Special Assistant to the President (House of Representatives), Hon. Ibrahim Zailani, will cross over to the Lower House to lay the budget proposal before it. A senior presidential aide confirmed to THISDAY yesterday in Abuja: “The Special Adviser to the President on National Assembly Matters, Senator Mohammed Abba-Aji, will lay the budget proposal before the Senate at 10 a.m.” The decision to lay the budget by proxy has, as gathered, been communicated to the leaderships of both chambers via two separate letters.

The Caucus of the Peoples Democratic Party (PDP) in the Senate met yesterday night in the official residence of the Senate President David Mark at Apo Quarters where the letter was discussed. The Caucus deliberated on the issue and decided to abide by the constitutional provisions on the issue of budget presentation.

What this means is that the Senate is ready to receive the budget from the Presidency through Abba-Aji in line with the provisions of Section 81(1) of the 1999 Constitution. It also means that it is ready to abide by Section 53(2) which vests in the Senate President the right to preside at the joint session of the National Assembly in case both chambers agree to a joint session. A row over the venue of the joint session had caused the lingering budget row.

THISDAY gathered last night that the decision reached at the PDP senate caucus meeting would be communicated to the entire Senate in a closed door session this morning at the start of today's plenary. Yar'Adua, according to development yesterday in Abuja, has successfully explored the provisions of Section 81(1) of the 1999 Constitution to settle, as it were, the row between the Senate and the House of Representatives on the joint session to receive the budget proposal. The Section on authorisation of expenditure from Consolidated Revenue of the Federation (CRF) stipulates: “The President shall cause to be prepared and laid before each house of the National Assembly, at any time in each financial year, estimates of the revenues and expenditure of the Federation for the next following financial year.”

Both Chambers had disagreed over the venue of the joint session to receive the 2010 budget last Thursday, thus forcing Yar'Adua to defer the presentation of the fiscal proposal. Arrangements that had been put in place with two sets of army band stationed in both the Senate and the House of Representatives' wings of the White Building housing the two chambers had to be called off. Abba-Aji had told Senate correspondents that the president would now present the proposal at a later date. He had used the briefing session to dismiss insinuations that Yar'Adua deferred the budget presentation because of some health challenges, saying “He is in perfect health; there is no doubt about that.”

In the court yesterday, the battle for supremacy between the two chambers of the National Assembly effectively took off as a Federal High Court sitting in Abuja ruled that the six members of the House of Representatives who went to court seeking a judicial interpretation of Section 4 of the Constitution of the Federal Republic of Nigeria 1999 indeed had locus standi to institute the case. The court also refused to strike out the Attorney-General of the Federation and Minister of Justice, Chief Michael Aondoakaa, as one of the defendants in the suit filed in the wake of the supremacy controversy that rocked the Minna legislative retreat last January.

There is however a problem in who leads the Joint Committee. This I agree is a constitutional matter and I agree that as a constitutional matter, the plaintiffs and indeed any Nigerian has the locus standi to bring action. I therefore hold that there exists a cause of action in this suit. “On the issue of misjoinder, 1st defendant's counsel contends that the Attorney-General of the Federation ought not to be a party in the suit. Section 150 of the Constitution established the Office of the 1st Defendant. He is the Chief Law Officer of the Federation of Nigeria. He is whose duty it is to interprete the Constitutional provisions to the Nigerian public. His inclusion in this suit is therefore apposite for an effective and effectual determination of this constitutional issue,” the ruling read in parts.

Shortly after the aborted Minna retreat of the National Assembly, six members of “The Initiatives”, a vocal pressure group in the House of Representatives had in February 2009, headed for the courts to seek legal interpretation of Sections 4(1), 53(2) and 54(2) of the 1999 Constitution.

The suit was meant to put to rest the raging controversy over which chamber between the Senate and the House of Representatives should take pre-eminence in the conduct of the affairs of the National Assembly JCRC. The suit was to determine among other things whether the tags “lower and upper house” have any place in the Nigerian Constitution and whether legislators elected into the House of Representatives were inferior in anyway to their counterparts elected into the Senate of the Federal Republic of Nigeria. Section 4 (1) of the 1999 Constitution states that: “The legislative powers of the Federal Republic of Nigeria shall be vested in a National Assembly for the Federation, which shall consist of a Senate and a House of Representatives”.

Since the controversy began, the House had maintained that in the eyes of the Constitution, none of the two chambers has been placed above the other and none therefore should be subjugated to the authority of the other.