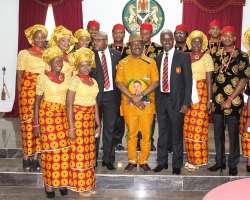 Take advantage of the peace, security and serene environment of Anambra state with its great tourism potentials as you embark on your latest adventure in our State. Anambra State Governor Chief Willie Obiano stated this while welcoming the delegation for the 11th edition of the Gulder Ultimate Search Television Reality Show holding in Aguleri, Anambra East Local Government Area who were on a courtesy visit at the Governor's Lodge Amawbia.

An elated Governor of the State, Chief Willie Obiano could not hide his feelings about the development and told the organizers and the GUS participants during a courtesy call at the Governor's Lodge, Amawbia that the State has huge tourism potentials for exploration. According to Governor Obiano said “most of the sites including the Ogbunike Cave have numerous appeals that bring people closer to nature. My administration is committed to making the state conducive for all and I am glad you are taking advantage of the peace we have in Anambra State and I welcome you.”

Obiano commended the GUS delegation that were in State against the backdrop of improved security situation and enabling environment for their wisdom in choosing Aguleri and Anambra State for the Show, assuring that they would enjoy secured, peaceful and serene environment throughout the duration of the search. He gave some historical facts of the community and noted that the visit would offer them opportunity to widen their knowledge and understanding of the State and Aguleri.

Governor Obiano further explained that his administration's economic agenda in the 4-Pillars of Development which include Agriculture, Trade and Commerce, Oil and Gas and Industrialization, and the Enablers were designed to expand the state's scope of investment, create employment and open fresh windows of revenue generation. He enjoined Nigerian Brewery, sponsors of the reality show to extend their investment to the State as part of its Corporate Social Responsibility and take advantage of the huge market to their various products.

Earlier, the Corporate Affairs Adviser of the Company, Mr. Kufre Ekanem noted that they chose the State and Aguleri because of the secure and conducive environment as well as remarkable achievements recorded by the State.

Mr. Ekanem observed that the State had become a reference point in the country as a standard bearer others were trying to emulate.

He assured that they would use the programme to showcase the remarkable achievements, recorded by the State to the outside world.