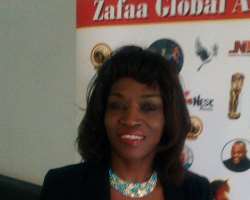 Whilst the whole world looks & waits with baited breaths on whether Scotland would gain her independence from the UK after over 300 years as part of the Union. Nigerian LGBTs along with Messers Ebah Joseph Teriah [claimant] and Joseph Ebah [Enahoro and Associates] legal brief for the claimant also await with baited breaths, to learn the outcome of his Justice Abdu Kafarati 's ruling on the claim filed against the Federal Govt in the Abuja High Court earlier this year. Ruling due on September 25th

Mr Joseph Teriah Ebah a straight ally had filed a claim against the Nigerian Govt on Constitutional grounds , the claim stated that the Same Sex Marriage (Prohibition ) Act 2014 a.k.a. Anti Gay Law was unconstitutionalas it failed to take into consideration the fundamental human rights of the Nigerian LGBT community. Ms Elizabeth Funke Obisanya (Hrh), a Christian LGBT film maker (Producer – Magdas lesbian lover – MLL©) seen here at the Zafaa Film awards submitters event last month , added to the argument - “ the law not only took away the rights of LGBTs to be who they are – Jesus paid the penalty price we are told in Galatians 3:13 so why the persecutions the law creates an environment of persecution and sufferings for the LGBTs community. Many have been thrown out of their homes, jobs, families, beaten up and publically humiliated- all backed up by the President and the Senators.

At a time when most of the African Nations have taken the anti gay stance would Nigeria break away from the homophobic fold and do what is right according to the Nigerian Constitution and allow equal rights for ALL NIGERIANS? Or would the senators and Goodluck Jonathan remain in violation of their respective oaths to Nigerians and the nation?