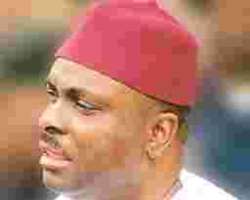 Former Delta State Governor, Chief James Ibori, may any time from now face interrogation from the Economic and Financial Crimes Commission following a fresh petition written against him.

Indication to this impending interrogation of Ibori emerged on Thursday following the commencement of investigation into the petition against him written by some prominent leaders from Delta State operating under the aegis of Delta State Elders, Leaders and Stakeholders Forum.

A source in the EFCC told our correspondent that the Delta Elders' petition against the governor was too weighty to be ignored.

It was also learnt that a team of operatives had been assigned to begin investigation into the allegations levelled against Ibori, who is a strong ally of President Umaru Yar'Adua.

Already, a letter had been written by the commission to the petitioners acknowledging the receipt of the petition and that they would soon be contacted if there was any need in the course of investigation.

When contacted, the spokesperson for the EFCC, Mr. Femi Babafemi, declined to give the details of the commission's action on the matter.

He merely said that the petition was receiving the needed attention, but confirmed that the anti-graft agency had written to the petitioners acknowledging the receipt of the petition.

Babafemi said, 'Yes, we are working on it. We have even written the petitioners and I can tell you that the commission will not sweep any petition under the carpet.'

Ibori was first arrested during the tenure of the erstwhile chairman of the EFCC, Mr. Nuhu Ribadu, and was charged to a Federal High Court in Kaduna.

The case however suffered a setback when the Court of Appeal sitting Kaduna ruled that the Federal High Court sitting in Kaduna did not have jurisdiction over the matter and that Ibori should be charged in his state.

He was subsequently arraigned in Asaba before Justice Mercel Awokulehin, who later discharged him of all the 170 count charge against him. The EFCC appealed against the ruling.

Copies of the petition were sent to the Governor of Delta State, Dr. Emmanuel Uduaghan; Attorney-General of the Federation and Minister of Justice, Prince Adetokunbo Kayode, SAN; and the Governor of the Central Bank of Nigeria, Mr. Lamido Sanusi.

The Forum is urging the EFCC to find out whether it was right to use the Delta State Government's shares to obtain a N44bn private loan from a bank.

According to them, there was evidence that shares worth N528.010m in Oceanic Bank belonging to the Delta State Government was used to guarantee over N44bn granted to Ascot Offshore Nigeria Limited by Intercontinental Bank Plc.

Part of the petition read, 'Is your commission selective in choosing which of former public officers to prosecute or is it because Chief James Ibori is a sacred cow? It would be recalled that non-secured debtors and non-performing debtors have been arrested and arraigned before courts of competent jurisdiction.

'The issue is why is your commission operating a double standard when it comes to any case involving Chief James Ibori? The report of the investigation has established a prima facie case of financial impropriety regarding the sale of N528.10million shares in Oceanic Bank Plc belonging to Delta State Government.

'Chief James Ibori during his tenure as governor of Delta State used the state's shares to secure a private loan for his personal company i.e. Ascot Offshore Nigeria Limited.

'We are therefore constrained to accuse your commission of wittingly and unwittingly aiding and abetting the wanton looting of Delta State treasury by Chief James Ibori and his associates.

'Therefore we humbly submit that you lack the moral justification to continue to prosecute the sacked CEO of banks who are currently standing trials for various offences.'