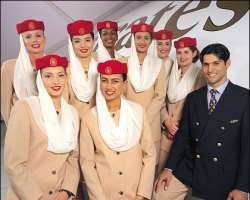 In continuation of their resolve to ensure customers on their respective networks experience seamless connectivity, Emirates, a global connector of people and places, and Arik Air, West Africa's leading airline, have signed a memorandum of understanding (MoU) to deepen its existing commercial relationship.

Though both airlines are currently in a one-way interline agreement, where Emirates passengers are connected throughout Nigeria and West Africa via Arik Air's current domestic and regional network, the new agreement recently signed by Adnan Kazim, Emirates' divisional senior vice president, Planning, Aeropolitical and Industry Affairs, and Chris Ndlulue, Arik Air's managing director in Dubai, will see both carriers explore other areas of cooperation for the future, including frequent flier programmes, passenger and cargo handling.

In a statement issued in Lagos, Kazim was quoted as saying: “Both Emirates and Arik Air have expressed interest in exploring ways to expand our existing commercial relationship and to look at different areas in which we can cooperate that will be mutually beneficial to both airlines, including seamless connectivity for our customers on our respective networks. We also intend to explore the potential of code share arrangements as passenger traffic flows mature between both parties' networks.”

Ndlulue on his part revealed that Arik was delighted on the new partnership as both airlines share a similar vision of convenience and safety to its customers.

“Arik Air is happy to open its network in Nigeria and West Africa to Emirates passengers; we are excited at the vast worldwide network of Emirates being made available to Arik Air's passengers. The invaluable cooperation between the two airlines offers a lot of synergy to both airlines in achieving their objectives,” he said.

Emirates is one of the world's leading international airlines and flies to more than 140 destinations in 81 countries across six continents. It operates the world's largest fleet of Boeing 777 aircraft and Airbus A380s.

Nigerian Arik Air is the largest airline in Western and Central Africa and has developed and successfully operated an extensive domestic route network in Nigeria, and regionally across Western Africa from its twin hubs in Lagos and Abuja, and to Johannesburg in South Africa and inter-continentally to New York and to London from its Lagos hub.