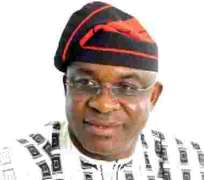 The Senate and the House of Representatives have passed a harmonised budget of N4.6tn for the 2010 fiscal year.

The budget was okayed on Thursday more than three months after President Umaru Yar'Adua had forwarded the initial estimates of N4.079tn to both chambers of the National Assembly on November 24, 2009.

The President of the Senate, Mr. David Mark, had after the passage of amendments to the 1999 Constitution called on the Senate Leader, Mr. Teslim Folarin, to read out the next item on the Senate's days notice paper.

Standing up, Folarin said, 'The next item on the order paper is the consideration of the report of the Committee on Appropriation, on the 2010 Appropriation Bill. I now call on the Chairman of the Committee, Chief Iyiola Omisore, to seek the leave of the Senate to present his report.'

Immediately, Omisore stood and said, 'I herby move that the Senate grant me leave to present our conference report on the 2010 Appropriation Bill.'

He explained that the Senate Committee on Appropriation and its House of Representatives counterpart had harmonised the budget.

Consequently, Mark asked, 'Is it the wish of the Senate that the chairman of be allowed to present the committee's report?'

When the Senators chorused 'yes,' Omisore again stood up and presented the report.

After this, the Senate dissolved into a committee of the Whole for clause-by-clause consideration of the budget.

Senators thereafter approved each clause of the bill by voice vote.

The harmonised budget is N528bn (13.3 per cent) higher than the first estimates of N4.07tn sent by Yar'Adua.

It will be sent to Acting President Goodluck Jonathan for assent.

However, the Executive later re-adjusted the original proposal by raising it to N4.3tn.

Further adjustments totalling over N217bn were later made to the budget, bringing the total amount passed on Thursday to N4.6tn.

Although the Recurrent Expenditure component of the budget is N2.077tn, the legislature said that it had reduced it by N257.5bn, down from the initial proposal of N475.7bn by the Executive.

According to a joint report by the Appropriation Committees of the National Assembly, the Capital Expenditure component of the budget was adjusted to N1.8tn, about N253bn higher than the Executive proposal.

Part of the document reads, 'The Executive proposal weighed heavily in favour of recurrent spending to the detriment of investment in capital spending.

'In the overall development of our economy, this trend was reversed to a more acceptable level. While the gap was N475.7bn, in the original proposal, this was reduced to N257.5bn in the bill being presented.

'In other words, while the recurrent expenditure was slightly reduced by about N15bn below the Federal Ministry of Finance proposal, the capital component of the budget was increased by about N253bn.'

About N497.071bn was set aside for debt service, while statutory transfers took the balance of N180.2bn.

The budget was predicated on $67 per barrel of crude oil, up from the initial projection of $57 by the Executive.

The National Assembly explained that, with an exchange rate of N150 to the United States dollar, the country would have realised a net revenue of N4.293tn at $57 per barrel of oil.

Oil production projection was put at 2.3million barrels per day.

However, with the revised oil benchmark of $67, the legislature said that the net earnings would now be N4.889tn.

But, an estimated N1.5tn accounted for the deficit in the budget, which is to be financed from international bond (N75bn); proceeds from sale of government property (N9.56bn); privatisation proceeds (N107.2bn); share of Federal Government's Signature Bonus (N132.3bn); and domestic borrowing of N897.3bn, among others.

In its review of the 2009 budget, the legislature claimed that the Federal Government recorded 'around 70 per cent' level of implementation, which it described as 'unprecedented,' compared to previous years.

A breakdown of the capital component of the budget showed that over N211.2bn was voted for the Ministry of Works and Urban Development, while the Power sector had a provision of N189.7bn.

About N149.9bn went to the Ministry of Agriculture and Water Resources, education had N97.2bn, while health received 67.2bn for capital projects.

The total capital expenditure for all MDA was put at N1.6tn, while federal executive bodies had additional provision of N18.5bn.

The Senate and the House of Representatives are to execute capital projects worth over N11bn.

However, the recurrent budget of the National Assembly showed that the Senate would spend N37.1bn, while the House would spend over N53bn.

The President of the Senate, Mr. David Mark, in his remarks, said the budget should be faithfully implemented so that it would benefit the generality of Nigerians.

'Unlike before, I want to advise that we must try to faithfully implement this budget to the benefit of the people,' he said.