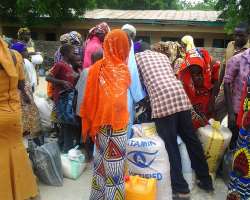 Honourable Mohammed Saleh Banga, Member representing Kwaya-Kusar at the Borno state House of Assembly has come to the aid of his people by distributing grains to the needy ones among them.

He has also procured and distributed fertilizers worth millions of naira to all farmers in the Local Government to enhance farmer's boost their farm produce.

The member who is the Chairman House Committee on Information has also been shouldering the Hospital fees and buying drugs to the sick in the constituency as part of his social responsibility to the electorate.

Honourable Banga in an interview with newsmen in Maiduguri yesterday disclosed that he has constructed mosque in Kwaya, Kubuku, Gwandi and Gusi-Bula villages inline with the request of the people of the area.

He has also been celebrating with the Christians of the area during festive periods of Christmas and Easter when he assisted them with Cows and foodstuffs for their celebration as well as paying their transportation fares to conferences.

He noted that, last December, he personally distributed hundreds of wrappers and clothing materials with additional N10,000 each to Pastor's wives and others to enable them saw their clothing for the festive period, in addition to procurement and distribution of poverty alleviation materials such as sawing machines, motorcycles, generating pump or irrigation machines among others to empower the people , especially youth in the council.

He therefore called on all and sundry to continue to pray for the restoration of peace in the state, even as he used the opportunity and urged the people of the state to support the administration of Governor Kashim Shettima for the development and progress of the state. \