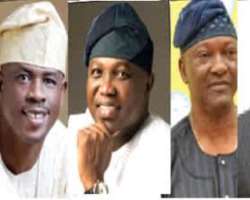 As the 2015 general elections are less than one year away, aspirants who are already jostling for the tickets of the All Progressives Congress and the Peoples Democratic Party in Lagos State, expect a tough battle ahead.

The Lagos State chapter of the All Progressives Congress and its major opposition, the Peoples Democratic Party will soon pick their respective candidates for the 2015 governorship poll in the state.

The PDP, no doubt, is keen to break the jinx of its persistent failure to rule Lagos State since the beginning of the current Republic in 1999. The PDP Chairman in the state, Capt Tunji Shelle, reiterated the party's determination to win the next governorship poll shortly after the PDP candidate, Mr. Ayodele Fayose, defeated Governor Koyode Fayemi of the APC in the June 21 governorship election in Ekiti State.

Shelle was quoted as saying that if PDP could win in Ekiti, the party could also repeat the feat in other South-West states.

But the APC Chairman, Otunba Oladele Ajomale, dismissed the claim. He believes that the APC can still retain Lagos State beyond 2015 as a result of its victory in the August 9 governorship election in Osun State.

The two parties have, however, adopted various strategies to approach the next election with agility and formidable spirit. While the PDP has united all its aggrieved members in preparation for the poll, the APC, has started holding meetings with members of relevant associations who may have felt aggrieved by some of the party's policies. Such associations include the National Union of Road Transport Workers.

The party may have also prevailed on Governor Babatunde Fashola to slash the fees payable by students of the Lagos State University, Ojo, to N25, 000 from between N185, 000 and N300, 000 after many protests by the students and the university's academic workers had failed to make the governor rescind on the initial increment.

Analysts, who are very familiar with the political landscape of Lagos, believe all the aspirants are strong individuals who are capable of shaping the direction of parties' primaries and the main election in 2015. To them, the battle for the soul of Lagos by the aspirants will not be an easy one.

Leke Pitan
Dr. Adeleke Pitan, born on January 14, 1956, was appointed Commissioner for Education between April 2006 and June 2007 and Commissioner for Health between June 1999 and March 2006 by former governor of Lagos State, Asiwaju Bola Tinubu.

He was Chief Medical Director of Mayowa Hospital, Lagos, between 1985 and 1999. Pitan is also a winner of the National Merit Awards of the Nigerian Medical Association and the General and Private Medical Practitioners of Nigeria, respectively. He is a member of the Lagos Island Club and the Pivot Club, Epe, Lagos.

The former commissioner, who declared his ambition to govern the state during a recent interactive session with journalists in Lagos, expressed confidence in the APC to win all the elective positions in the state next year.

Describing himself as a tested and trusted loyalist, he said he was asked by the party members and leaders to offer himself for the governorship position.

Ganiyu Solomon
Popularly called GOS, Senator Ganiyu Olanrewaju Solomon believes that he is the best candidate for the governorship position based on his experience as a businessman and a former chairman of the Mushin Local Government Area.

GOS, who was born on December 19, 1959, was first elected to the Lagos State House of Assembly under the defunct Democratic Party of Nigeria in 1998 during the regime of the late Head of State, Gen. Sani Abacha, but he had yet to be sworn in before Abacha died.

The political scientist was elected Senator on the platform of the defunct Action Congress to represent Lagos West on May 29, 2007 before the party merged with others to form APC.

“I have the experience and I am convinced that I will take the state further from where it is now,” GOS said.

Ambode was speculated to have been endorsed by the APC National Leader, Asiwaju Bola Tinubu, and the Oba of Lagos, Oba Rilwan Akiolu, as Fashola's successor.

The retired permanent secretary was born on June 14, 1963 in Epe, and was said to have contributed to the successes recorded by the current administration as he assisted to formulate and implement the policies that stood Lagos out.

He was particularly said to have designed the template that increased the revenue generation from N600m to over N10bn monthly.

Ambode retired from civil service in 2012 to set up his firm which is currently consulting for government at all levels.

He is facing criminal charges by the Economic and Financial Crimes Commission.

Musiliu Obanikoro
The Minister of State for Defence was born in Lagos Island and studied at Texas Southern University, Houston, Texas, United States.

He returned to Nigeria in 1989 to begin his political career as he was appointed Caretaker Committee Chairman of Surulere Local Government. He also served in the administration of former Lagos State Governor Michael Otedola as Director of the Lagos State Bulk Purchasing Corporation.

Between 1999 and 2003, he served as Commissioner for Home Affairs/Culture in Lagos State before he contested the 2003 general elections on the platform of the defunct AD to represent Lagos Central in the Senate.

While in the Senate, he dumped the AD for the PDP on whose platform he contested the 2007 governorship election in Lagos State, but lost to Fashola.

The late President, Alhaji Umar Musa Yar'Adua appointed him as Nigerian Ambassador to Ghana in 2007.

Obanikoro's ambition to rule Lagos has not waned since then as he has been criticising the current administration for non-performance.

The pharmacist dumped the defunct AC to contest for the governorship election in 2003 as a result of some irreconcilable differences with the latter. His recent defection to the PDP has been celebrated as a welcome development by many people.

Though Agbaje had met with Jonathan over what some people have described as the moves by the Federal Government to present a formidable and strong candidate to challenge whoever APC might present, he still needs to convince Obanikoro, who has never hidden his ambition to be governor of the state.

Ade Dosunmu
Ade Dosunmu, who lost to Fashola in 2011, is also interested in contesting the forthcoming poll. Though he has not been prominent in PDP unlike Obanikoro, Dosunmu was reported to have said that he was still interested in “rescuing the people of Lagos State from the present hardship that has been inflicted on them through very harsh economic policies; and very harsh environment.”

Deji Doherty
The PDP chieftain is a household name in Lagos State politics.

Doherty, who had contested for the governorship poll three times, expressed his optimism to get the PDP ticket in October during the party's primary.

He became the Acting Chairman of the PDP Caretaker Committee in the South-West last year. Described as a PDP loyalist, he has shunned entreaties to dump the party for the ruling APC.

The aspirants, according to analysts, should brace for a serious battle that is sure to produce the strongest candidates for each of the political parties in the forthcoming 2015 governorship poll in the state.