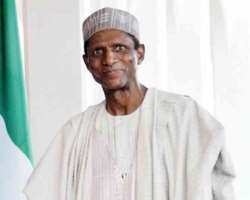 NEXT
March 26, 2010 01:52AM
Politicians of the ruling People's Democratic Party (PDP) have expressed anxiety over plans by loyalists to ailing President Umaru Yar'Adua to bring him to the Friday Jumat service today.

Party officials said it is disturbing that this is coming three days before the Senate begins the screening of ministerial nominees on Monday. They also question the choice of a religious occasion for Mr. Yar'Adua's re-emergence in public.

One source said, 'if the President would be coming out four months after his absence, it ought not to be at a religious event because that will send the wrong signal.'

Mr. Yar'Adua, a Muslim from Kastina State participated in the weekly Jumat service at the National Mosque located at the Central business district in Abuja until his illness kept him from public view.

The ailing President was flown out of the country on the 23rd of November 2009 to Saudi Arabia for a heart condition and has since been out of public view.

Last week, two national dailies claimed that plans were afoot for the ailing president to make a public outing this week.

Top presidency and PDP officials confirmed to NEXT last night, that the planned outing has being fixed for today's Friday prayers.

'The idea is to achieve maximum political impact and a religious approval' a PDP official said last night.

The PDP chairman; Vincent Ogbulafor, the speaker; Dimeji Bankole and a few other officials were in a closed-door meeting regarding the development, and the mood at the meeting, a knowledgeable source told NEXT, was 'celebratory and bubbling.'

The National Assembly, on the 9th of February, 2010 declared the Vice President Goodluck Jonathan as the Acting President based on the 'Doctrine of Necessity' because the ailing president failed to hand over the reins of power to his vice before his departure as recommend by the constitution.

After much outcry and protest from civil societies and series of litigations on the lacuna in the nation's presidency, the ailing president was sneaked into the country in the early hours of 26th of February, 2010, days after his Vice was declared the Acting President

The Acting President dissolved the Cabinet of ministers appointed by the ailing President last week and had just sent a list of Ministerial nominees to the Senate for screening. Mr Yar'Adua's return to public life could cause uncertainty in the polity.