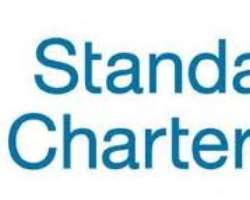 The New York Department of Financial Services (DFS) said the British bank's internal compliance systems had failed to detect or act on a large number of “potentially high-risk transactions” mostly originating from Hong Kong and the United Arab Emirates.

The new punishment came two years after the bank paid US regulators $667 million to settle charges it violated US sanctions by handling thousands of money transactions involving Iran, Myanmar, Libya and Sudan.

A DFS monitor appointed in 2012 to keep an eye on the bank discovered that it had not detected the allegedly high-risk transactions from Hong Kong and the UAE and reported them as it should have, the department said.

“If a bank fails to live up to its commitments, there should be consequences. That is particularly true in an area as serious as anti-money-laundering compliance, which is vital to helping prevent terrorism and vile human rights abuses,” said DFS head Benjamin Lawsky.

The department did not give any information on the nature of the transactions, or whether they proved to involve laundering or not.

In a settlement agreed with the bank, DFS ordered Standard Chartered to halt dollar-clearing operations for unnamed “high-risk retail business clients” of its Hong Kong unit.

The bank is already cutting business with high-risk clients in UAE, but will also not be able to process dollar funds through the United States for them.

Its New York branch also is forbidden to take on any clearing or deposit accounts from new customers without the approval of Lawsky's office.

The action taken against Standard Chartered is part of an ongoing crackdown by New York state and federal authorities on banks, particularly foreign banks with New York branches, for handling money transfers from countries and individuals blacklisted by Washington for political reasons or for their involvement in criminal activities.

In the largest case, French bank BNP Paribas agreed to pay $8.9 billion in July to settle charges that for years it knowingly violated US sanctions on Iran and Sudan.

BNP Paribas and other banks fined for similar reasons were ordered to implement stringent compliance regimes to ensure they do not break US rules in their dollar-clearing businesses.