Top 5 Reasons Why We Shouldn't Sleep On Niyola 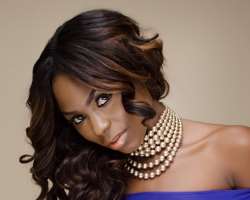 Niyola (Eniola Akinbo) is a Nigerian singer, songwriter and performer. In 2000, she was the first runner up for the AMEN Starlet competition. She later joined Trybe Records, moved to Westside Music and is now the first lady of EME (Empire Mates Entertainment) Records.

1. Her songs have a soulful R&B feel to them, while incorporating her African cultural background as she sings in her native language (Yoruba) as well.

2. She was nominated for the Nigeria Entertainment Awards in 2013 under 'The Most Promising Female Act to Watch' category and in 2014 for 'Female Artist of the Year'.

3. Niyola is hot! Have you taken a look at her lately? Her makeup is flawless, hair is on point and body in tact.

4. In the past, she wrote the theme song for TuFace's second album concert, did jingles for Coca Cola and a few other international brands.

5. Lastly, I am very surprised at how she got Banky W to sound so 'grown and sexy' in her latest song 'Love to Love You'. What do yal think?
© 2014 Nollywoodgists.com