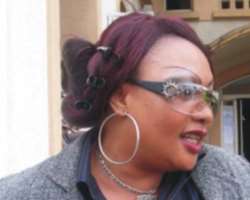 There are indications that one of Nollywood's most versatile actresses, Eucharia Anunobi has bid the make-believe industry farewell.

The light-skinned thespian who had been in and out of court for sometime now over a divorce case she filed against her estranged husband, Mr. Ekwu, cheap at a Lagos High Court, said she is currently doing other things.

Eucharia, while chatting with Nollywoodgists.com on Facebook on Monday stressed that she has moved on with her life and that coming back to the face the camera is not part of her plans for now.

When asked what has been happening to her all this while following the messy fall-out between her and Mr. Ekwu, Eucharia simply said “everything is fine now.”

What about acting? Is there any hope that her teeming fans who have obviously missed her acting skills in fresh Nollywood flicks would see her anytime soon? “I do other things now…” that was her response.

Although she refused to give details of what she is doing at the moment Nollywoodgists.com learnt that if she eventually returns to acting, it may take a long while perhaps after the dust created by her marriage break-up settles.