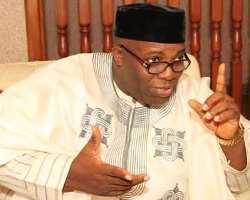 The Presidency on Tuesday flayed the Northern Elders' Forum (NEF) for demanding that President Goodluck Jonathan rescue the over 200 Chibok school girls or forfeit his 2015 re-election bid.

The NEF had given Jonathan a two-month ultimatum within which to rescue the girls.

The over 200 Chibok school girls were abducted by the Boko Haram sect since April 14 and have since been in the sect captivity.

A statement by the Senior Special Assistant to the President, Dr. Doyin Okupe, retorted that the President did not require such threat or ultimatum to be alive to his responsibilities.

“The issue of insurgency, especially those ideologically based on Islamic extremism is a global phenomenon and requires tact, military capability, serious de-radicalisation techniques and community based counter insurgency programmes to ensure success,” Okupe stated.

The presidential aide said the administration was doing everything possible to ensure that the girls are rescued alive, adding that the various measures adopted by the government would soon yield positive result.

“We are improving on our operational capabilities and efficiencies by acquiring more advanced weapons and technologies for our military and security agencies.

“We have drafted more military personnel to the region to strengthen the fighting power of our armed forces.

“We are taking advantage of the offers from our international military and intelligence allies to assist in identifying key locations.

“We are working with our neighbours to secure the borders and limit the movements of the Boko Haram fighters, building on the agreements reached at the recent summits in Paris and London.

“We are deploying more resources to maximize operational efficiency, acquire more advanced and relevant weaponry and boost the general morale of our combatants. This is why the government recently requested for an additional funding of $1billion.

“And the last piece in the puzzle is targeting the domestic and international funding, and stopping the money flows into the coffers of the terrorists.

“With all these efforts and the support of our allies, these steps will help fight the threat of the Boko haram and move us closer to bringing the girls back safely,” the statement added.

Also on Tuesday, a pro Igbo group, the Igbo Redemption Group (IRG) joined issues with the northern elders over the matter, saying their position was unreasonable, unpatriotic, divisive and unfortunate.

Briefing journalists in Abuja, the leader the IRG, Chief Delly Ajufo, said the northern elders' position had confirmed the suspicion that the kidnap of the girls was meant to prevent President Jonathan from seeking re-election.

“Statements like these coming from people who cannot lay claim to any significant contribution to the growth and development of Northern Nigeria is nothing but a mark of desperation which we hopefully assume does not represent the views of right thinking leaders of the North,” Ajufo said.