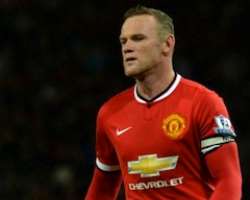 The 28-year-old England striker succeeds Nemanja Vidic after the Serbia defender left United at the end of last season to join Inter Milan.

'For me it's always very important the choice of captain,' said van Gaal in a club statement issued after United's 2-1 friendly win against Valencia at Old Trafford on Tuesday.

'Wayne has shown a great attitude towards everything he does. I have been very impressed by his professionalism and his attitude to training and to my philosophy,' the Dutchman explained.

'He is a great inspiration to the younger members of the team and I believe he will put his heart and soul into his captaincy role.'

Rooney, who could now also become captain of England following Steven Gerrard's retirement from international football, said: 'It is a huge honour for me — and for my family — to be named captain of this great club.

'It is a role I will perform with great pride. Team spirit has always been very high in our dressing room and I am very grateful to the manager for the faith he has shown in me. I look forward to leading the team out on Saturday at our first match of the new season.'

Van Gaal, who formally took charge at Old Trafford last month after guiding the Netherlands to third place at the World Cup, said Scotland midfielder Darren Fletcher, whom he labelled a 'natural leader' would be the team's vice-captain and lead the side in Rooney's absence.

'I am delighted to have been named as vice-captain,' Fletcher said. 'It's a very proud moment for me and my family.

'Wayne and I have always worked well together and we will continue to work closely together in our new roles. I would like to thank the manager for putting his trust in me.'

United play their first competitive match under van Gaal when they begin their Premier League campaign at home to Swansea on Saturday.