Governor Akpabio, 2015 And His Traducers 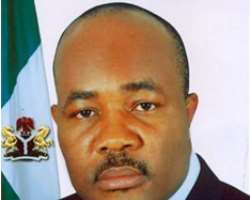 In recent times, notably, as the tenure of the present administration in the state is winding up, the state Governor, Chief Godswill Akpabio has been a subject of terrible criticisms, both in the media and in political circles, by some of those who were once his friends, political associates, and beneficiaries among others.

This scenario makes the politics of Akwa Ibom State governorship elections of 2015 more interesting, thought stimulating, and intellectually tasking, since the creation of the state in 1987 for a number of reasons. First, the incumbent governor of the state, Godswill Akpabio has redefined the character of politics through unparalleled infrastructural development, thereby engendering greater interest for the position of Governor, by politicians. The result of this is that politicians have come to the realization that government can indeed be used to touch lives.

Secondly, the formation of hostile political alliances and counter alliances, aimed at forestalling Governor Akpabio's succession plan has led to "a unity" of the opposition elements in the state to achieve that purpose. I will come back to that shortly!

The removal of Umana Okon Umana, as Secretary to the Akwa Ibom State Government on July 29, 2013 had unsettled the political equilibrium in the state. It gave succinct meaning to Paulo Coelho's philosophy that anyone who has loses something he thought was his forever finally comes to realize that nothing really belongs to him.

Umana's anticipation was a negation of providentialism. He had erroneously assumed that nobody, including God, could stop him from succeeding Chief Godswill Akpabio as Governor of Akwa Ibom State in 2015. This belief was predicated on the fact that he was the primus inter pare in the state, with the entire political machinery of state at his disposal. Obviously, Umana had consolidated his firm control of this machinery by spearheading the removal of EXCO members and political office holders that were not in his good books, and bringing on board those that would enhance his political ambition. But he miscalculated, because the resignation of Mr Nsima Ekere as deputy governor in 2012 had opened a new vista in the political history of the state. That resignation attracted widespread condemnation by pundits, and analysts alike, while ushering in a new of phase of opposition.

The "new opposition", found expression in the "Operation Umana must Go campaign", which drew currency from three main groups, namely: the first was those sympathetic to Obong Nsima Ekere, who saw their principal as a victim of an inordinate lust for power by Umana(UOU); the second group consisted of supporters of political appointees who fell off favour, and were relieved of their positions on Umana Umana's recommendation and intrigues. The third group or the middle force, was an amalgam of Akwa Ibomites in the diaspora, and at home, with firm control of the media, particularly, the internet space and the local newspapers who believed in good governance, justice, and equity, and doubted UOU's capacity to guarantee these variables, in the face of his overbearing and larger- than-life approach to leadership. Together, it was an uncoordinated, but voluntary political revolution aimed at installing a just and tranquil socio-political order, which is a prerequisite for sustainable development. Herein lies the basis of zoning and political rotation, as enshrined in Nigerian Constitution (federal character principle), and the constitution of the Peoples Democratic Party).

The appointment of Udom Emmanuel, an Executive Director of Zenith Bank as Umana's successor, both as SSG, and as "the ordained system candidate" for the office of Governor, also was gratifying. The unique and path breaking appointment, was not only commendable, but timely, as need arose to give the government a corporate image. A few months later, Udom Emmanuel became the 'Right Man' for the 2015 governorship. What gives him indomitable advantages over other contenders are his solid professional background, where he comes from, which is ESD, and ultimately, the Governor's support.

The choice of Udom Emmanuel, arguably, was thoughtful and cerebral, the reason being that he has a sophisticated knowledge of the workings of the global political economy, owing to his meteoric rise in the corporate world. If Udom(UGE) is such a marketable brand, then the fact that his purported adoption by the governor as successor has multiplied Governor Akpabio's traducers, is even more evident.

There is a home- grown argument, that the governor should allow the people a free hand to choose whoever will lead them in 2015. This argument springs from the camps of nearly all the guber aspirants from Uyo Senatorial District, but that line of thought loses its tenability in the context of politics. Harold Laswell defined politics as a process of who gets what, when, and how, and David Easton conceives of it as authoritative allocation of values in the society. While Easton's definition is capable of throwing us into an endless debate, especially on the specificity of "values", Laswell's definition gives a clearer insight into the dynamics of politics and entire political process, in the sense that it explicates the rationale for those in power expressing preponderant interest in who succeeds them. As a political scientist noted, the greatest desire of of leaders are glory, honor, and prestige. ( Political relevance and capital accumulation are attendants of these).

By possible extrapolation, these values, though egoistic in nature, are so core to leaders that they wouldn't compromise them on the altar of "political trivialities". By extrapolation, it's irrational to assume that a sitting Governor wouldn't be interested in who wants to succeed him. Why then do we refer to a governments as a continuum? Policy consistency lies at the heart of this. As noted George Guvamatanga, a Financial Expert, and Managing Director of Barclays Bank of Zimbabwe, policy inconsistency and lack of clarity continues to scare off potential investors in Sub- Saharan Africa... No one gives you money or brings investment because they feel sorry for you or they like you, but because it makes investment sense. Policy summersaults, therefore, kills the potentials of an emerging economy, making a nonsense of past efforts at development. The facts that the Tinapa Business Resort is in a state of comatose, exemplifies the primitivity of policy inconsistency. Leaders therefore prefer as successors, those who would likely share their vision and conceptualization of development, and it is believed that the "body-language" of Governor Akpabio is looking in the direction of Udom Emmanuel. This has elicited an unprecedented vilification by a few other aspirants, principal among which are Umana Okon Umana, former Secretary to Government, Bassey Albert Akpan, immediate past finance Commissioner, Bishop Samuel Akpan and Chief Assam Assam who is the Nigerian ambassador to Russia.

While Umana is apparently aggrieved with the Governor for firing him as SSG, and adopting Udom Emmanuel to succeed him as Governor in 2015, others are crying wolf that instead of the Governor imposing a successor on the people, the electioneering process should be on a level playing turf, against the PDP zoning arrangement which was reaffirmed in the town hall meetings that the governorship position for 2015, be zoned to Eket Senatorial District of the state, which has not produced a governor, since Akwa Ibom was created in 1987.

It begs the question, as what would precipitate Umana's grievance, having served as SSG, a position for which he least bargained, for six record years? A political scientist, and Philosopher Baron De Montesquieu avails us with the possible answer to the question thus: power corrupts, absolute power corrupts absolutely... Abraham Lincoln reinforced this when he opined that, nearly all men can stand adversity, but if you want to test a man's true character, give him power. Political Analysts believe that Umana Okon Umana's ambition to govern Akwa Ibom falls flat of reason, and is studded with greed, and quest for personal aggrandizement, as his attitude depicts a man that cannot be trusted with the assets of power. His numerous sponsored advertorials and media attacks against the governor, whom he served for that long attests to his hypocritical demeanor. That's why keen watchers and pundits have argued that it's the height of ingratitude and caricature for a man who served in a government for six years as a rallying force and an integral part of it, to censure it.

Bassey Albert Akpan, who was recently relieved of his duty as Finance Commissioner, considers his removal from the state EXCO, as an opportunity to launch his governorship ambition. He is believed by many, particularly, the youth of Uyo , Itu, and Ibiono, to be a very generous person, whom, if given an opportunity to rule the state, would lead a policy that will empower young folks in the state. His aim to rule Akwa Ibom State is borne out of infantile exuberance. A Peace Expert with the university of Uyo posits that Bassey's exuberance has misled him to the thought that the "boys" played an important role in the 2006 governorship primaries that led to the emergence of Chief Godswill Akpabio, and that the same feat will be repeated in 2015.

Bassey was allegedly coerced into the 2015 governorship fray by a group of boys, who constitute what has come to be known as I-33. This group initialized with UOU as their plan A, and Albert as an alternative, or plan B. Their current routine is taking their campaigns to palm wine joints, and other public arenas. A political commentator once said that this group anchors their reliance on the use of terror and violence in order to achieve their objective. But the reliability of this theoretical underpinning is shaky, in the sense that electoral violence can only thrive in an environment that is conducive to it. Furthermore, the growing level of political education and maturity in the Akwa Ibom society is antithetical to the "violence thesis", and therefore situates it within the prism of juvenile hallucination.

There is another group who sees Governor Akpabio as a betrayer. Led by Samuel Akpan, a former Deputy Chairman of the PDP, the group's resort to spirituality is known to all. Samuel Akpan allegedly believes that he played a pivotal role, through the instrumentality of a group AKPF, in the emergence of Governor Akpabio in 2006, and therefore deserves a "pay back", by being allowed by the Governor to him succeed. If one juxtaposes this claim against the fact that there were over a thousand persons that supported the governor in 2006, then it loses it's essence. Again, it has been argued in intellectual circles that if Bishop Akpan played any spiritual role in the emergence of Chief Akpabio, it confers on him certain spiritual abilities. Rather than resort to physical accusations, he should make a recourse to the similar spiritual means to attain the governorship in 2015.

There is a seeming unification of the opposition, all aimed at stopping Governor Akpabio from producing a successor, that is alien to the socio-politics of the state, but is it possible for any of them to concede to another, taking their exhibited desperation into consideration?

As the traducers of Governor Akpabio grow in number, and strength, the first thing that agitate the mind of everyone is, why have these men, who once sang the songs of uncommon transformation, suddenly see the "vinegar" in it because they want to become governor?

Do these men possess the prerequisites to sustain the current development trend in the state? Is there any relationship between political hypocrisy and policy consistency? History will tell!