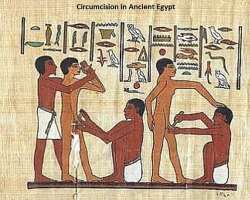 They say the colonialist conquered Africa by the means of gunpowder from Arabia/Asia and germs. Hygiene was not a virtue in Europe. The Queen of England is famed to have said she only had a bathe once a month, “whether she needed it or not.” King James' custom was to have his bathe only once a year. [Ref] So it was in Europe.

A bathroom was not a natural property of a home and till date, we find in England that bathrooms are recent extensions of many homes, being added later. The relevance of this is the relationship between moral hygiene and disease. Europe had the worst plagues in recent human history. The Bubonic plagues... the plagues in the dark eras. These plagues wiped out much of the population of Europe, most especially its men; indeed it was plagues and wars that led to the feminist culture and women in the work environment, because with the death of so many workers, women were forced to work to assist the European economy. The plagues were directly related to filth in Europe. The colonialist picked up soap and bathing habits from his exploits to Africa, the Middle East and Asia.

Fast-forward to 2014. Africa is plagued by HIV and plagued today by Ebola. Africa has become the bastion of sorry health problems in addition to other inabilities. What is the commonly attributed source of Ebola (if we deny any biological warfare intentional dissemination), it is from bush meat. In Africa many of us love to eat these wild animals. Baboons, Gorilla's, snakes and what have you. Nothing will stop us from biting in to the juicy strands of these animals, spicily roasted. And these animals remain the reservoir of Ebola.

When we study HIV, we see similar simple cultural behaviors that can diminish HIV rates in Africa. Circumcision which is not only a monotheistic habit in Judea-Christianity and Islam but dates back to Kemetic practices of ancient Nubian Egypt; this simple practice of cutting off the foreskin of the male penis reduces the risk of HIV infection by as much as 60% from scientific studies. The cheapest methods of eliminating health problems is prevention. And much invaluable prevention is in religious and cultural doctrine.

In the western world today, they have invested in perfecting expensive methods of curtailing outbreaks and treating diseases. To Africa's shame, our leaders have been hopeless; hopelessly embezzling all the capital that African states should have used to advance its health-care system; and while they have spent time dancing and swallowing billions of dollars for the state, diseases, crime, terror and other crises have not waited but have advanced as much as modern innovation has permitted. While African leaders today do elaborate opening ceremonies when they build ordinary roads and establish train networks, the world has advanced in leaps and bounds in disease management and also in type of deadly germs.

Ebola has plagued Africa for 4 decades. Africa has no hope of dealing with it and waits for the west to look into our problem for us. Our leaders invest nothing into directing the proper healthcare preventive measures which are cheap to establish or in investing in and sponsoring appropriate research into more complex levels of disease management. We embrace the cultural dangers and advanced risk habits from Europe, but are denied the associated health and social wealth checks they have. African leaders and government cabal 'business' tycoons have the most private jets in the world, but the people have the least health-care expenditure per capita, per person – less than $100/year/person in Africa compared to more than $8000 in the US.

We call to Europe to help. We run to France, to America to set up regional collaborations among us to tackle terror; we run to them to decide how we must manage Ebola.

It is to our shame in Africa; and it's not just our leaders whose heads should be in the ground, but us all.