Insurgency: Navy assures of the safety on Niger Bridge 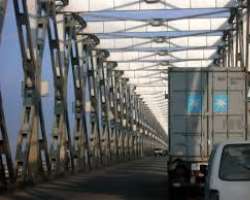 Insurgency: Navy assures of the safety on Niger Bridge
Listen to article

The Nigerian Navy said on Monday that it had deployed a standard security measure to guard against any insurgency activity around the Niger Bridge in Onitsha.

NAN reports that the Niger Bridge (the National Unity Bridge) is the only link between the South-East and Delta State through South West Nigeria.

The Commanding Officer of Naval Out-post, Onitsha, Navy Capt. Mike Oamen, told NAN in Onitsha, Anambra that the bridge was under heavy surveillance.

“We are on top of the water (River Niger); the way we did it is concentric lines of defence.

“So, we patrol the waterways; as you come into the land, the marine police are there.

“Because there is a gradual organisation as you come from water to land, land to water.

“That is the standard security architecture – the Navy on water, then by the side of the water you have the marine police; then you graduate into land, army and like that.

“But the way we are doing in Anambra is a joint operation; you can even see Navy at Uga Junction.

“So, we just look at strategic locations in terms of logistics; we are all working together, because that is our strength: our togetherness,” he said.

The commander lauded the people for co-operating with the state's joint task force to flush-out criminals who had been in the business of giving wrong impression of Anambra citizens especially residents of Onitsha.

“We need more information whether through the 112 hotline or any other means to make sure we permanently get rid of these hoodlums disturbing the peace of law-abiding residents of Onitsha,” he appealed.

NAN recalls that the navy with support from sister agencies had taken over the responsibility of restoring sanity and night-life in Onitsha and its environs.