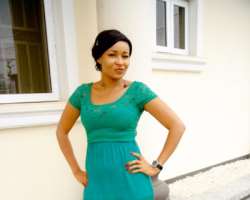 Some days ago, sultry actress, Doris Simeon added another year and she released some stunning photographs to mark the day. The beautiful mother of one surprised many with her astonishing beauty as displayed in the photographs.

Speaking on her birthday, Doris revealed that, "A brand new me has been born as I celebrate my birthday on Tuesday, July 22, 2014 and like it is written in the holy book, old things have passed away as new things are just by the corner."

However, Doris, who recently returned to set after few months of break, said, "It has been a long journey, yet I am thankful and grateful to God for keeping me till now. It's a wonderful feeling, adding a year in good health and a mind free and devoid of hate or pain, I can't but thank God.

She admitted that, 'Yes, we have some sad times, bad moments in life, which most times want to slow us down, but pointed out that, 'Like I always say, these moments and times help us and make us better people. I don't regret anything because I've moved on to greater things and living brand new."

The actress dropped the bombshell by saying, "Don't expect me to make a movie anytime soon, but I would keep working on productions as a featured actress. Aside the television programme, Faaji Xtra, which I anchor, fans and industry peeps should simply watch out for something unusual and unlike me on the screen. I've shot some exciting movies and TV soaps and I'm still on some sets so you would be seeing so much from me."

Apart from her television show, Doris has been very busy with her beauty salon, which is situated in Ogba, Lagos.